Well, I guess I can't just get to write about the good ones, and oh my was this a not so good one.  Coming off what I agree with Mike Parker as one of the best baseball come backs in recent memory, the Beavs coughed up, choked on their gloves, and threw away the rubber game 2 to 5 yesterday.  Or as the athletic site titled it all: Uncharacteristic Errors Fuel Beavers' Loss In UCLA Series Finale.

Basically it came down to five errors that led to four unearned runs.  I mean it was issues in the infield, outfield, and so on that just killed the Beavs Sunday.  You could feel all the energy of the game go out of the Beavs, and even with some sluggish hitting there was some good stuff going on with the offense in the beginning but that all went away in the last few innings.  I don't want to take too much away from the Bruins' pitchers but again it just felt like the Beavs lost any spark to get things turned around once those last array of errors gave UCLA the lead.

The offense highlight was the back to back two out doubles by Wong then Ortiz to take the lead.

I think one of the more frustrating things about it all was that Jorge Reyes really pitched a pretty good game with only allowing six hits and one unearned run.  I swear five of those were to hitters under 200 averages for the year!  But he was really strong against the core of UCLA's order, such as striking out hitters like Decker three times!  But all for not for Reyes got the loss.

Really that's all about there is.  That was not a good game and the team is playing Oregon this Tuesday then is going into a very challenging series against ASU.  ASU will be very tough to take a series from (I doubt very much we can get a sweep) but now it is a very much a must win series to really have chance (albeit a small chance now) at hosting a regional.

I'll be at the ASU Saturday game and yes I'm still excited about seeing some OSU baseball!  Will try and get some pics and hope to see all of Beaver Nation there!

Box score details for the game follow the break (if you really want to see them). 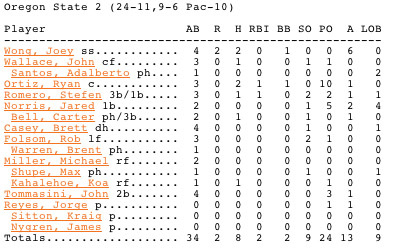