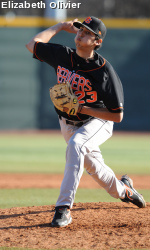 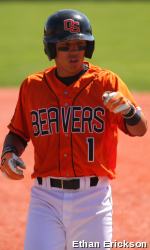 Well, it comes down to this!  As a series this has been a competitive one, but I'm sure I'm not alone and saying I do hope the Beavs take this last/rubber game in a more definitive fashion (but won't complain too much as long as it is a W).

A win today puts the Beavs back in nice position going into the series with first place ASU next week.

A few quick thoughts about Saturday:  First what a great win!  After going ahead and then again losing the lead the Beavers really came out and showed some impressive grit to score three runs in the ninth to pull out the 5 to 3 win.  Again Joey Wong just seems to find the spark at the right time after really doing nothing on offense.  And some great and stressful (for me) line-up calls/substitutions by the coaching staff after Coach Casey was ejected.  That all said, I would really like to see the bottom part of the batting order step up more, get back to the more rounded line-up we saw earlier in the season.  And yes this means I really want to see Tommasini get out of his batting funk.

The defense was very sharp I thought, and the D made some awesome game saving plays.  Peavey and Osich did have their rough spots but kept it close enough, along with the excellent play behind them, to give the offense the chance to win it.  Especially impressive was Peavey getting out of that bases-loaded situation in the third inning!  Grbavac also did a fine job and Rhoderick cleaned up nicely picking up the win.

I think most everyone on the poll below has been feeling about the same as I have and this is very important series to take.  You know all in all I would have really liked to have the team easily win it Saturday, but at the same time I think the motivation that this close win gave the team could go a long way.  But we'll all see tomorrow for it is all even and winner takes the series!