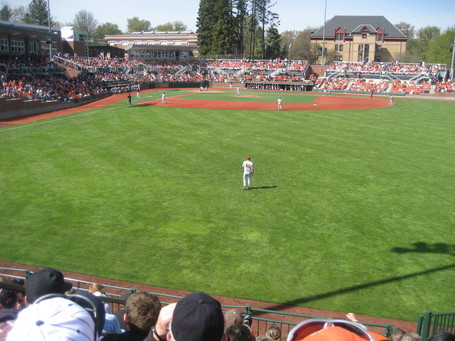 Wow, what a tough game. I thought we played pretty well but got some tough calls and breaks at the end.

I'll start with the way we played. Unfortunately, I missed the first and only two runs scored by us due to the Woodburn Tulip Festival traffic so I won't be able to recap on that. From what I saw we played great defense. I also thought that Greg Peavey pitched a great game. We'll need him and Reyes to shine come tournament time. We got some tough breaks in the ninth inning with bad bounces and such. What contines to kill us is runners left on base. I don't want to question Coach Casey's coaching but when we have runners on 1st and 2nd with nobody out, I don't know why we are bunting. USC knew exactly what was coming and executed perfectly. Other than that I think Casey is a great coach it's just that I think he may be in love with bunting and small ball a little to much. I think we just need to get a win on Sunday and put this series behind us. Anyways, now I'll move on to the officiating.

I thought the umpires did a pretty good job today. There was a couple ball and strike calls I didn't like, but I'm sure they had a better view than mine in the right field bleachers. There was a couple of calls in the ninth inning that were questionable. The first one was on USC's double to get two runs scored. It looked to me like the ball hit the chalk (to make it fair) but I talked to some fans after the game who were looking right at it, and they said said it was definitely foul. The second one worked out in our favor but the SC player hit a soft grounder that seemd to initally go foul but then hop into fair territory. We ended up gettin the out anyway, though so I'm not going to argue. Now, I'll move on to the way USC played.

I thought the Trojans played great and if they started the year out like this, they definitely would be in talks for the NCAA Tournament. They have a great coaches, and great athletes. You can tell they work on game situations a ton, and know exactly what to do on each play. I also noticed that their outfield is incredibly fast. I thought some balls were sure to drop but they caught them every time. Now, I'll move on to some random things.

This was my first trip to Goss Stadium and I thought it was absolutely beautiful. I love the setting and how all of the buildings surround it. My only complaint is that for the people sitting in the right field bleachers, there should be a scoreboard on the other side of the field. You can usually know what the score itself is, but it would be helpful for the count and how many outs there are. They could also add more seats to the bleachers so people who come late don't have to stand the whole game. I thought the crowd was great also. Even when we were down three going into the bottom of the ninth, the crowd's cheers made you think you were up three.  The crowd of 3,120 was a regular season record at Goss. I highly reccomend going to at least one game this year. Another thing is that I saw a few USC students at the game. I think it's great that in College Baseball when you have around 25 home games, that students still want to go to road games.

I think the Beavers still are the second best team in the Pac-10 but baseball teams go through slumps, and we are experiencing ours right now. It will be very tough to catch ASU now but we can still do it. Our schedule only gets tougher from here so we will really find out what kind of team we are.