One thing, of many things, that I have been impressed with this year's baseball team is their bounce back from difficult games (read here: poor performances) on offense.  Yesterday's game the Beavs left 12 on base costing them the win, but today left only 6 and were just that much better on offense.  Indeed, today the Beavs did something they really haven't all year and added some power to the bats.  Jared Norris had a two run HR that really opened it up for the Beavs 7 to 3 in the seventh (I was at my son's soccer game but actually got to hear this hit on the radio when I went back to the car for my phone!).  Ryan Ortiz had his first HR of the year to claim a nice insurance run in the ninth, and John Wallace blasted a ground-rule double over the fence (that actually ended up costing the Beavs a run!).  And finally Joey Wong went 3 for 5 with 2 RBIs.

"We bounced back after a tough loss Friday and had a good offensive day," Oregon State head coach Pat Casey said. "This was a good win in a tough place to play. Joey looked good at the plate and Jorge (Reyes) threw very well. He earned that win." (Retrieved from Wong, Norris Lead Beavers Past Arizona In Series Finale)

Defense and pitching was pretty sharp.  Jorge Reyes struggled a bit at the start, especially in that Arizona three run second inning, but he settled down well and kept the strong UA bats in check.  Overall Reyes had some good production with an impressive pitch count of 114.  I personally did not see/hear really anything after the fifth so would welcome anyone's impressions of the defense and pitching after then, especially how Sitton and Rhoderick did in closing (Rhoderick did a nice job with getting UA to hit into a game ending double play when it looked like Sitton had some control issues with a walk and hitting a batter).

I actually think Arizona is better than their record shows.  I'm pretty impressed with their bats and this was an excellent series to take on the road.

Oh, and have I mentioned that this is the FIRST series win in Tucson since 1963?  Well it was!  Congrats to the team!

"With the win, the Beavers took the series from the Wildcats, 2-1. It's Oregon State's first series win in Tucson since the 1963 season when Arizona was a member of the Western Athletic Conference and the teams were meeting for the first time."  (Retrieved from Wong, Norris Lead Beavers Past Arizona In Series Finale)

The team hosts BYU for a two game stand this coming Monday with the first pitch scheduled at 5:00.  Then the Beavs get a chance at some payback for last year's series by hosting USC this next weekend. 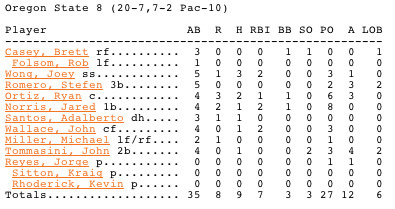