Share All sharing options for: Not this time: Beavs drop game 2 to Arizona 5 - 6

Hmm, as much as last night's game was satisfying in how the Beavs grinded out a win this afternoon's loss was as frustrating.  I guess that is what happens when you leave 12 on base (yes, that is the number 12), just put in two of those base runners and the Beavs come away with a win.

A bright spot is that freshman Ryan Gorton came in relief for a knocked around Greg Peavey and Gorton gave up just two hits and two runs and had three Ks.  The offense was not horrible in that the Beavs had 11 hits and did get 5 runs, but it just was not enough even with Ryan Ortiz continuing his strong play at the plate going 2 for 5.  Logan Lotti and Jared Norris both contributed RBIs and Max Shupe got his first hit of the season (a pretty clutch hit actually that again was wasted with no runs coming out of him moving the runner to third in the seventh inning).  I was a little surprised to see Santos come in to pinch hit for Lotti, but the Beavs were needing some big time spark in their final at bat.

For the full story see Baseball Drops Second Game Of Series To Arizona.

Arizona has some bats that's for sure (Ortega is a hitting machine!), but with more production by the Beavs offense they should come out with a series win tomorrow.  I will be interested to see if the team can again bounce back strong from a tough loss.  The game is scheduled for noon and same GameTracker and radio coverage.  Go Beavs!

After the break is the good and bad news box score stuff. 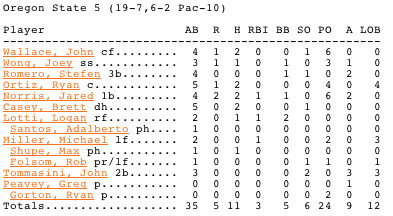