Beavs (finally) get it going late and beat Arizona 9 - 5

Share All sharing options for: Beavs (finally) get it going late and beat Arizona 9 - 5

Okay, I'll admit it, it was the sixth inning and Arizona had just gone up 5-4 on the Beavs and I was thinking that Waldron is off, the bats have cooled off, and the defense was seeming to be a bit sluggish; and so I was thinking this just wasn't happening tonight.  Okay I thought so that's not so bad still two more games to take the series and ASU could likely lose a game to WSU this weekend.  But I guess the team wasn't in my state of mind for Waldron with all his issues kept it close and Nygren came in and pitched well (earning his second win of the season) and Gaviglio looked very sharp closing.  All of this building on a great double play by Tommasini who caught a fly ball and threw out a runner at home with bases loaded.  From there the Beavs closed the deal in convincing fashion by scoring four runs in the eighth and one more in the ninth.

It wasn't the best of wins, but it was a W and it was impressive nonetheless in the way the Beavs grinded out the win in the last couple innings.

Ryan Ortiz continues his blistering pace on offense going 4 for 5 (tying his career high) and we got a wonderful timely double by Logan Lotti (a surprise bit of offense there!) to drive in the go ahead run, and Jared Norris drove in two runs including the tying one in the eighth.  So with the leading batter on the bench (Santos) the team got great leadership from Ortiz and production from some unlikely sources.

"Ryan had a very good game at the plate and the offense really picked it up in the last few innings," Oregon State head coach Pat Casey said. "It was important to come out here and get the first win."  (Retrieved from the Oregon State Athletic site, see:  Led By Ortiz, No. 16 Beavers Open Series With 9-5 Win At Arizona)

I will say it was interesting that Gaviglio came in to close instead of Rhoderick but I don't know if we can make much out of that yet since the team was up four runs.  I think if the game was a run or two difference and it was Gaviglio closing it would have been a bigger deal.  But that all said I will say that Gaviglio looked very good as the closer last night and glad we have more than one arm to go.

Oregon State plays Arizona again this afternoon with Greg Peavey on the mound and the first pitch is scheduled for 2:00.  Coverage looks to be GameTracker and radio again. Go Beavs! 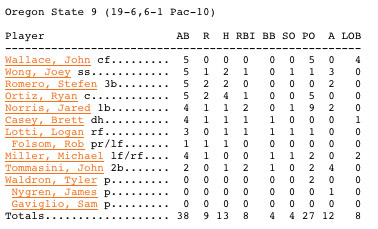