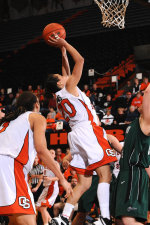 The Beavs will play the winner of Wednesday's Nebraska/New Mexico game, and this game will be played on the road next Saturday.

Additionally, OSU now has the most wins (12 wins) in the WNIT of any Pac-10 team.

"First of all I would like to congratulate my team on a 20-win season, that hasn’t happened since the 1994-95 season," OSU head coach LaVonda Wagner said. "I thought it was an excellent basketball game, both teams competed hard for 40 minutes. They (PSU) did a nice job of rebounding the basketball but we did force them into 25 turnovers. Also, we were able to get to the free throw line and were able to make our free throws and so we’re really happy about that."  (Retrieved from the OSU athletic site, see: Women's Basketball Advance in WNIT)

The game was much closer than the previous meeting where the Beavs ran away from the Vikings 58-24, and with this win OSU extends their win streak over PSU to ten, and the series total to 26-6.

Congrats to the team!  Let's keep these basketball games going!