The bats stayed very much alive tonight in a sometimes wet and sloppy game. Unfortunately I didn’t hear all of the game and had to tune in and out, so if I miss anything please feel free to add your thoughts in.

The game sounded like it did get a bit wet in the mid to later innings and seemed to me like it might have caused some issues in fielding (except for the poor decision to throw to second base, cough I mean to center field!), but luckily for every error the Beavs had St. Mary’s countered with their own and the Gaels ended up with four pretty costly ones.  But one thing I will add to give the proper credit and the OSU bats were again aggressive all the way through the line-up, and with another double digit hit total they really put the pressure on the St. Mary’s defense and pitchers.

Adalberto Santos had a monster of a game going 4 for 5 with four RBIs and a highlight two RBI home run.  What I was very impressed is that the Beavs did a really good job with hitting people home and the six run fifth inning was a great example.  Back-to-back doubles by Santos and Boyd did a wonderful job at clearing the bases, and then Casey singled to reward Boyd by allowing him to score a run.  They have had a few off games but the offense this season has been very impressive and is going to continue to give opposing teams fits.

"This was a solid effort tonight," head coach Pat Casey said. "Adalberto had a solid game offensively and has had a solid last two weeks of hitting. Greg had a good outing and we played well overall. We still have two games left this weekend and need to put in good performances before we open up Pac-10 play next weekend."  (Retrieved from the OSU athletic site, see Santos Drives in Four as the Beavers Defeat Saint Mary's)

The Beavs and St. Mary’s go at it again tomorrow at 1:00 and the game is again available on radio, GameTracker, and pay-for video stream.  I’m looking forward to it!  Go Beavs! 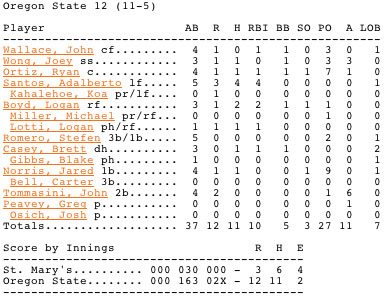