Share All sharing options for: No repeat of 2008: Beavs take care of Utah Valley 17-2

Wow, where to start with this game?  Well, 17 to 2 final score pretty much sums up the dismantling of Utah Valley the Beavs put together last night.  If we remember from last year the Beavers were coming off a possible season saving series win over UCLA and then turned around to lose to Utah Valley 11-4, which lead into what became the season ending slide to 2008.  This year the Beavers showed no rust as the offense, pitching, and defense were all clicking in both games against Utah Valley.

There were a ton of highlights and I only have time to hit the highlight highlights, so if you have anything to add please do in the comments.  First, what about Joey Wong's grand slam?  Or what about Ryan Gorton's first collegiate win and pitching a very solid five innings giving up only four hits and no runs.  The Beavs didn't give up a run until a passed ball in the eighth, and by that time the offense had efficiently taken apart Utah Valley to the tune of a 14 to 0 lead.

Joey had a great hit on that grand slam and overall it was a good effort.-Pat Casey

Really everyone contributed last night with such people as Boyd (with a two RBI home run), Miller (going two for two with one RBI), Casey (one for one and one RBI), and Norris (one hit for two RBIs) all doing their part.  And this is only giving credit to the non-regular suspects and Romero, Ortiz, Santos, and Tommasini all also contributed.  It was a truly impressive team effort. As the OSU site put it: "The middle of the Beavers' lineup was brutally efficient."  (Go here to read the OSU site's story Oregon State Baseball Downs Utah Valley.)

The Beavers take on St. Mary's tonight at 5:00 and it again looks to be available on radio and GameTracker for free access and video stream for a charge.  The next two games are against St. Mary's and could be interesting to see how we do against the first shared opponent with our first Pac-10 conference series opponent: UO.  Go Beavs!

After the break are some of the box score details (well worth sharing I think).

Box score details below and for the full box score and play-by-play go here. 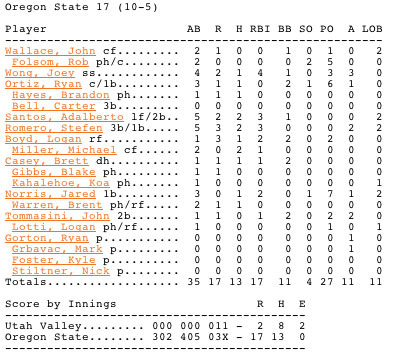