Beavs bounce back against Utah Valley: 7-0

Share All sharing options for: Beavs bounce back against Utah Valley: 7-0

Tyler Waldron had a great game.  The sophomore had 6 strikeouts on the way to a really solid eight shutout innings.  Waldron gave up three hits, and if I remember correctly none were extra base hits.  Brad Kidd came in the ninth and faced four batters giving up a lead off single but then retiring the next three (striking out two) to end the game easily. 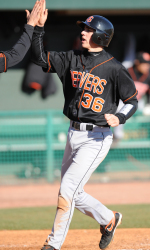 The offense was also solid with what I imagine was a pissed-off Ortiz bouncing back from his previous game's bases-loaded disappointment by going 3 for 3 with two doubles, one of which was a bases-loaded bit of redemption to break open the game in the fifth inning.  It was great to see Ryan bounce back so strong and lead the team, here's to more of this!

The Beavs were able to score seven runs, and even though at times looked like the starter for Utah Valley was giving them some problems the bats were patient and did what was needed (and more) to support what I think was the best pitching outing this season.  Santos had a solo homerun, along with RBIs from Wong and Gibbs.  Tommansini did his part again in the ninth spot and went 2 for 3 with a double and contributed a run.

For more see: Waldron Dominant as Beavers Shut out Utah Valley and here is the Boxscore.

OSU takes on Utah State again this afternoon (Friday) with, I think, the scheduled start at 5:00.  The athletic site does not have anything listed, as of this morning, about the coverage, but yesterday we did have radio, GameTracker, and a live video feed.  Also, the listing is a bit confusing with the times and opponents, but looks like a 5:00pm start again.   So I'm hoping for a repeat of this live coverage and also a repeat of the results. Go Beavs!

Okay, so didn't see this (I was going off the schedule page):