Breaking the Press: It's not that hard, is it?

Share All sharing options for: Breaking the Press: It's not that hard, is it?

The Beavers lost to the Ducks in the Civil War 79-69. In case you missed it, you can read my game story here.

If you're Coach Robinson, you know that your team imposed their will for about the first 24 minutes of the game. The Beavers led by ten at halftime, then came out and put more distance between themselves and the Ducks with five straight points from Seth Tarver. 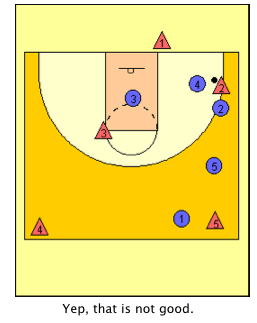 But then, the Oregon full-court press changed everything. The Beavers seemed to stay calm-- which I liked-- but they let the Ducks impose their will for the remainder of the game. Oregon forced 12 Oregon State turnovers in the final 20 minutes, and scored 12 points off of those turnovers. Meanwhile, the Ducks only turned the ball over once.

So what, really, went wrong? From my vantage point, the Beavers just got reluctant. They knew not to force things and push the tempo against the press, but they didn't do what they needed to do in order to swing the mometum back. And they also made mistakes-- 12 second-half turnovers worth.

Craig Robinson talked after the game about how it's partially due to the fact that the Beavers have been winning so many games. I think he's right-- the Beavers have actually gotten used to winning-- they'd won seven of their last eight before yesterday. When the Ducks began to swing the tide of the game, the Beavers just didn't rise to the occasion and play with a sense of urgency.

"We pretty much just stopped executing,'' Calvin Haynes told reporters after the game. "We stopped doing what was working for us.''

The Beaver offense, which looked so good in the first half with back-cut after back-cut, went MIA for most of the second half, and the Ducks took over.

"There's no excuse,'' said Haynes. "We didn't do what we needed to do. They were down 14 on their own court, and discouraged, and we did not punch them in the mouth when we had to.''

The Ducks went on a 19-0 run over a five minute stretch of the second half, and the game was never the same.

The press should be outlawed...