Share All sharing options for: Beaver Offense Flows, then Ebbs in Tempe

In a tournament sponsored by baseball bat-making company, you'd expect a weekend full of offensive firepower, much in the same way you'd expect Tiger Woods to win the Buick Invitational nearly every single year.

The Beavers started the weekend out firing on all cylinders offensively, as the Beavers strung together 20 hits in the tournament opener against Northern Illinois, then 13 hits against Missouri in Game 2.

However, in Game 3 against Arizona State, and Game 4 against Northern Illinois, a lull came over the Beaver bats. See for yourself: 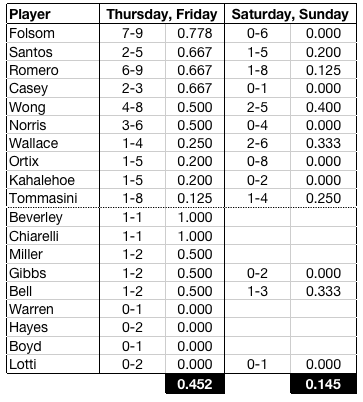 Now, I'm sure that the Arizona State pitching staff is one of the best we've seen, if not the best.

First of all, I like the offensive prowess that our team has already displayed this season. Folsom, Romero, Wallace, and Ortiz will be a dangerous heart of the order. However, the drought that the Beavers went through on Saturday and Sunday worries me a bit... is this something that we might see more of as the season rolls along? Or is this sample size too small?

I'm interested to get some other opinions on this.

The Beavers will be back in action on Thursday as they play San Francisco in the opening game of the Palm Springs Tournament.