Share All sharing options for: Jake's Thoughts from PGE Park: OSU Pulls Through in Game 1 of Pape Grand Slam 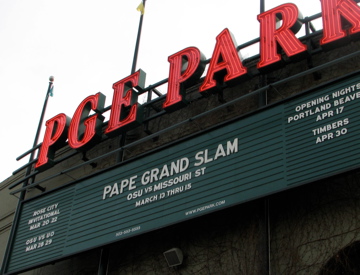 It was a great night for baseball in Portland, although the late afternoon sun turned to a chilling wind by the late innings of the game. The box score indicates that 4,129 fans turned out for the game-- it seemed like less-- but overall it was a great family atmosphere at PGE where you could sit practically wherever you wanted.

Tyler Waldron got the start for Oregon State on the mound. He looked very impressive in the first several innings, giving up only one hit to the first ten batters he faced, retiring the other nine. He struck out five batters in his six innings of work, but seemed to lose his effectiveness as he got into the fourth, fifth, and sixth innings, where he gave up a combined eight hits and seven runs.

The Beaver offense performed well, but they were particularly aided by Missouri State third baseman Brayden Drake, who could not make a play to save his life in Friday night's game. If you were at the game, or perhaps listening on the radio, you may know what I'm talking about. I was sitting just a few rows above the third base dugout, and my entire section was ridiculing this guy the whole game, and he was deserving it. He was charged with three errors in the game, but, I'm telling you, there were about six or seven plays that he didn't make. I don't remember him making a play all game long.

The Missouri State errors proved to be constly. In the third inning, the Beavers had one out and one on when Jared Norris hit a sure-fire double play ball up the middle, but MSU shortstop Travis McComack bobbled it on the transfer. Three Oregon State runs would go on to score in the inning.

While we're talking about the Oregon State offense, we should mention that OSU third baseman Stefen Romero took MSU starter Tim Clubb deep off the left field wall of PGE Park in the fourth inning for a home run.

Now... back to the MSU defensive woes. In the sixth inning, John Tommasini led off with a single to left. Joey Wong grounded out on a swinging bunt, then Adalberto Santos struck out. Runner on first.... two outs.... and John Wallace walks. Then, Romero hits a grounder to third, where our buddy Brayden Drake bobbled the ball, allowing everyone to reach base safely. (Meanwhile, chants of "Number 5!", "Number 5!" ring out throughout PGE among fans who haven't yet figured out the poor kid's name.) Then, with the bases loaded, Jared Norris singled to left, driving in Tommasini and Wallace.

Those two runs cut Missouri State's lead to one after they scored all seven of their runs between the fourth and sixth innings.

Still down by one, the Beavers came to bat in the eighth inning with only six outs left to regain the lead. Adalberto Santos led off with a base hit to our favorite third baseman Brayden Drake. Drake could have played the ball, but couldn't get the throw to first in time. It was scored a hit, but could have been an error. John Wallace bunted Santos to second, then Stefen Romero hit it to (guess who) Drake at third base, who made a throwing error, giving the Beavers runners at first and third with one out. Pinch hitter Blake Gibbs walked, loading the bases, and bringing Ryan Ortiz to the plate with one out. Missouri State went to the bullpen for Cody Aycock, who gave up a two-RBI double down the left field line to Ortiz on his second pitch of the game, bringing in Santos and Romero, but more importantly giving Oregon State the bad back for the first time since the third inning. Koa Kahalehoe would then fly out to left, and pinch runner Brent Warren would be called out at the plate tagging from third on the shallow pop fly.

With the Beavers regaining the lead in the bottom of the eighth, crowd-favorite Kevin Rhoderick was summoned to save the game in the top of the ninth. The flame-throwin' righty struck out Kevin Medrano to start the inning, then forced Ben Carlson to ground out to first base. That brought up (guess who) third baseman Brayden Drake with two outs in the top of the ninth with his team down two... he actually got a decent base hit, but the fact that he was due up third in the ninth was quite ironic. But it didn't matter, as Rhoderick struck out Chris Player to end the ballgame and get his fourth save of the year.

James Nygren was credited with the win for the Beavers, his first of the year. Nine-hitter and second baseman John Tommasini went 4-for-4 in the game, after failing to get a hit in his last eight at-bats prior to Friday's game. Stefen Romero went 2-for-5 with two runs scored and an RBI, while Ryan Ortiz also went 2-for-5, scoring once and driving in three.

The Beavers will play Missouri State two more times this weekend, if the weather holds. Game 2 of the Pape Grand Slam is scheduled for 2:00 this afternoon at PGE Park.