Share All sharing options for: Oregon Scores 51 in Second Half, Overtakes Beavers

The Beavers won the first half, but the Ducks won the second half-- and the game-- Sunday night at McArthur Court.

The Beavers, who haven't won a game at Mac Court since the 1992-1993 season, seemed in prime position to do so until the Ducks took the lead for good with 11:47 remaining in the second half. Oregon took the lead as part of a 19-0 run over the course of five minutes in which the Beavers didn't score. Oregon went on to win the game by the score of 79-69. 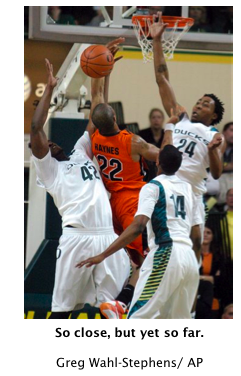 "This definitely stings," Coach Robinson said after the game. "We haven't had a game where we played this poorly in one segement for a long time."

Oregon State falls to 7-9 in Pac-10 play with the loss, but has two more games next week before the Pac-10 tournament.

The Beavers played a brilliant first half, in which they shot 62.5 percent from the field, seemingly making back-cut after back-cut to quiet any kind of Oregon attack.

But the Ducks used the full court press to their advantage in the second half, getting the Beavers off balance for long enough to turn the momentum.

"That press bothered us," said Robinson. "We were way to casual. That's a function of having put a lot of games in the 'W' column-- there are quite a few lessons to be learned here."

The Beavers have come from behind to win games on multiple occasions this season, usually by riding their 1-3-1 defense. But Oregon State's usual defensive strength wasn't effective against the Ducks, as the Beavers seemed to play more man-to-man defense than zone, and more 2-3 zone than 1-3-1.

"I feel for Seth... he plays so hard," Robinson said. "He just had a dark cloud over him tonight. This was the first day we didn't get very much out of our 1-3-1. We just couldn't make up for it in other ways."

Calvin Haynes led the Beavers with 16 points, but his 5-for-16 shooting performance wasn't too impressive. He seemed to force it at times, but when the Beavers got down with a large amout of time remaining, I felt like it was Calvin that would get the Beavers back in the game. He made a couple big shots, but it wasn't enough.

Seth Tarver came through with 14 points offensively on a night when his defensive game lagged at times... he had some nice backdoor cuts and overall play around the rim. One steal in the game for Seth.

Roeland scored 13 in the game, most of them coming in the first half. Six assists, but three turnovers. He had a look at some big three-point shots, but couldn't get them to fall at the right time. He made two in the first half, though. But that air-ball... I might have nightmares about it.

Good effort from Lathen Wallace in just thirteen minutes... he hit two big threes towards the beginning of the game, and provided some firepower before Calvin Haynes even got in the game. He got into some fould trouble though, and finished with nine points.

Claitt makes that baseline inbounds play look so pretty, and his eight points seemed to all come at opportune times. Four of six shooting isn't bad, with four assists in 38 minutes.

All-in-all, it's not a game for the Beavers to hang their heads on. There's two more games next week, and they're not out of reach by any means.

Coach, after the game: "We might have come in to confident. Too cocky. That's what happens when you win games. It's a good lesson for us."