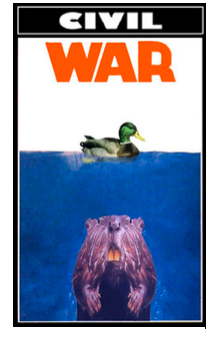 Pregame: It's Civil War II, as the Beavers are looking to move to 8-8 in Pac-10 play, while the Ducks are looking to forge ahead to 2-14. In Oregon's lone win over Stanford last week, everything seemed to come together. They found balance in the offense, got the big men involved, and beat the Cardinal by eight. Now, mind you, the Beavers have defeated Stanford twice this season, so there's really no possible way that you can start making comparisons and find a reason why the Ducks should beat the Beavers today. The Beavers have been solid on the road, with victories at Haas Pavilion, Maples Pavilion, and Friel Court. Why not add Mac Court to that list, with a road-trip to Los Angeles next week?

Halftime: The Ducks made a run at the Beavers late in the half, but the Beavers answered, and are still up ten at the break. Oregon State is shooting 62.5 percent in the half... the offense is working well, and there haven't been that many 'bad' shots. Schaftennar leads the way with nine points in the first half, and three players have six points apiece. I love that-- we're at our best when all of our weapons are contributing equally.

Final: Oregon takes a ten point halftime defect and turns it into a ten point victory. Great win for the Ducks at home to move to 2-14 in Pac-10 play. Final score: Oregon 79, Oregon State 69.