Learn From the Past: We've Gotta Stop Tajuan

Share All sharing options for: Learn From the Past: We've Gotta Stop Tajuan

The Oregon Ducks have two seniors on their roster. One scores 3.1 points per game, the other scores .07 points per game. They're basically non-factors without much experience.

Eight players on the Oregon roster are freshmen. Two of them have started 22 games, and five of them play over ten minutes per game. They're alright, but, when it comes down to it, it's junior Tajuan Porter who carries the load.

Porter has the big game experience. He's helped his team win a Pac-10 tournament, and was named MVP there. He's been to the NCAA Tournament twice, and knows what it's like to play in the Elite Eight. 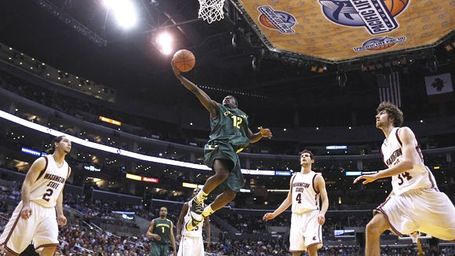 But this year, his team is 1-14 in the Pac-10 conference heading into Sunday's game against Oregon State. Aaron Brooks, who departed from Eugene after Porter's freshman year, is long gone, and Porter's the man in charge of running the offense.

While Tajuan struggled with the extra duties of running the point his sophomore year, he's making improvements now as a junior. His three point field goal percentage, which dipped to under 36 percent last year after he shot 43 percent his freshman year is back on the rise, and he's converted on more than four three-pointers in ten games this season.

In January's Civil War, Tajuan converted five three-pointers in the first half, and accumulated 19 points by halftime. After that torrid opening stretch, the Beavers made a simple adjustment, and Porter never was the same,

"We had to make an adjustment," Craig Robinson said after beating the Ducks in January. "We said in our scouting report that if they don't make threes they can't beat us." As a team, the Ducks were 7 of 10 from three-point range in the first half.

"We had someone shade to his side so he wouldn't just be able to shoot off the catch" Omari Johnson said of the defensive adjustment. "We didn't want to double away from him or leave him open."

In the second half, Porter made just one shot-- a three-point basket with about 4:30 remaining in the game. He was 1-of-4 shooting in the second half, and his team caught the bug as well: The Ducks were just 3-of-13 in the final 20 minutes from behind the stripe.

Containing Tajuan Porter will be a key for Oregon State in Sunday's Civil War, there is no doubt about that. Look what a simple adjustment did last time.