With Jordan "The Moose" Lennerton off to the Minor Leagues, the Beavers looked to the Junior College ranks in the offseason to find a replacement at first base.

Who they found was Stefen Romero, a 6'3" 225 sophomore from Tuscson, Arizona. He played one season for Arizona's Pima Junior College, batting .412 with seven triples, four home runs and 53 runs batted in. Romero was  named to the All-Arizona Community College Athletic Conference First Team as an infielder.

Through the first two games of the season, Romero has already been showing off his offensive prowess. On the weekend, Stefen was 3-for-8 with three runs scored, a double, a home run, and three runs batted in. 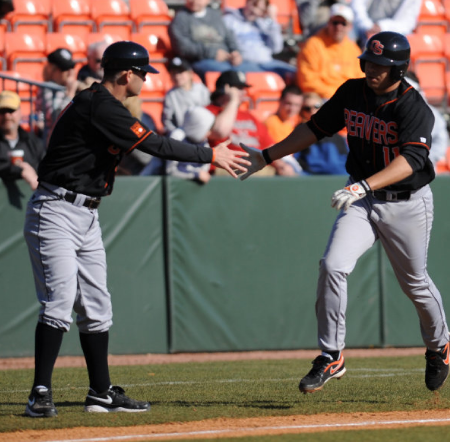 Jordan Lennerton, Romero's predecessor, hit .277 last year, and made just two defensive errors over the course of the season, equating to a .994 fielding percentage. Jordan hit six homers on the season.

Through the first two games, it looks as if Romero will give the Beavers a powerful bat in the middle of the lineup. We'll have to wait and see what kind of infielder he develops into-- Stefen was unable to make a play on the ground ball that won the season opener for Tennessee, but it's hard to judge him on just that play.