Share All sharing options for: Baseball Season Has Officially Started

With the success of Craig Robinson and the Men's Basketball team, today wasn't as big of a holiday as it has been in years past. In fact, you may have not even celebrated today's events yourself.

What was the big deal today, you ask? Pat Casey and the baseball team started practices at Goss Stadium, as the Beavers look to make a run at the postseason for the a fifth straight year. 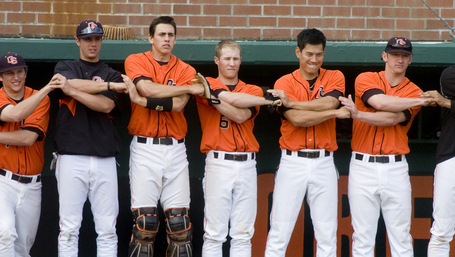 It's February, so let the dugout superstitions begin! (via blog.oregonlive.com)

There will be plenty of baseball coverage filling this space soon, but for now, it's a brief shoutout to this year's O-State Ballaz as they begin preparation for the 2009 season, which gets underway February 20 in Knoxville, Tennessee.

By the way, the first eleven games on Oregon State's schedule are away from home. After that stretch, the Beavers will play Missouri State in the three-game Pape Grand Slam at PGE Park. Then, the first true home game for the Beavers comes March 17 at Goss Stadium in Corvallis.

Should be another fun ride.