Where We Go From Here

Share All sharing options for: Where We Go From Here

Now that we have all had our chance to share Benny's "Drat!" moment, the question is where do we go from here?

In the short term, we go to the TV to see whether we get lucky enough to go to San Diego for the holidays, and the Holiday Bowl, or back to Las Vegas, and Sam Boyd stadium, site of the Beavers' 23-21 win over UNLV on a windy night, for the Body Show Bowl, aka, the Maaco Las Vegas Bowl. More on the outcome of this on BTD later, after we see what Saturday's results, and Athletic Director Bob DeCarolis' cell-phone melting sales job, bring.

An important question for OSU fans for sure.

But on the subject of getting another shot at the Rose Bowl in the Civil War, and the third time being the charm, where we must go is back to work on line play.

With no intent to throw any of the Beavers' offensive or defensive linemen under the bus (they wouldn't fit under there any way), the fact remains that is where Oregon St. must make some more headway.

Losing conference games by five, six, and four points is why the Beavers are an 8-4 team, and a 6-3 team in conference, and solidly in the 11-35 portion of the college football world, and not in the 1-10 portion. Both the offensive and defensive lines share in the challenge.

I say challenge, not problem, because when you replace a bunch of NFL bound players, and still play for the Rose Bowl, you are doing a lot right, or the Beavers would be back with the Sun Devils and Huskies today.

Whether it's better footwork from Michael Philipp, strength training for Grant Johnson, or pass protection improvement by Mike Remmers (just some examples, not the only whole story), the Beavers have to get better at spacing their blocks.

Clearly having to settle for too many Justin Kahut field goals is a problem, but too often the problem with red zone and third and fourth down conversions started with poor production on first down. Jacquizz Rodgers doesn't need a lot of daylight, but he needs some room, and too often opponent defenses were able to jam up all the running lanes forcing the Beavers into long yardage situations. 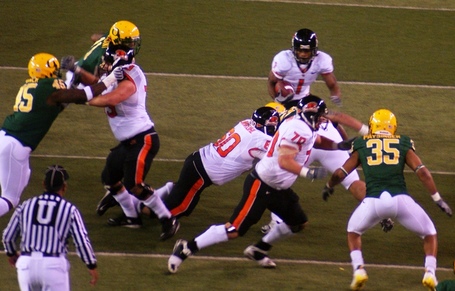 Note that even though no Duck defenders have a clear shot at 'Quizz, there is no lane to cut into.

Just as serious, the defensive line had trouble getting up field, and as a result couldn't make stops when necessary. The Beavers were overall solid against the run, but when it mattered most, the Ducks ran for 288 yards, and they did it because they frequently carried the battle to the Beavs, rather that the other way around.

When Morgan Flint connected on a field goal in the fourth quarter, which took Kahut out of the equation, it was just the fourth time the defense forced a field goal in such a situation, against over 20 touchdowns. If settling for field goals was a problem for Oregon State, it certainly wasn't for the Beavers' opponents. Turn that one stat around, and OSU is a BCS team.

And even when the Beavers didn't give up a score, needing one more stop, they couldn't get it. Both USC and Oregon needed a first down to run out the clock, and they got it. Big games are usually won by your best players, and to make a difference, they have to be on the field. Sean Canfield, the best passing quarterback in the Pac-10, and the Rodgers brothers, the most dangerous and productive duo in college football, were left standing on the sideline.