Run Up To The Rose Bowl Rough For Pac-10

Share All sharing options for: Run Up To The Rose Bowl Rough For Pac-10

After going 1-2 in the Christmas week bowls, the run up to the Rose Bowl wasn't much better for the Pac-10, which again went 1-2 in the New Year's week bowls.

UCLA joined USC in the win column, with a 30-21 comeback win in Washington, DC, over Temple, but it didn't look good early on. The Owls continued a pattern of opponents that came out ready to play, and took a 21-7 lead deep into the second quarter.

The Bruins began the battle back, with a field goal from All-American kicker Kai Forbath, just before half time. The drive was the momentum swinger, as Coach Rick Neuheisel's squad proceeded to score 23 unanswered points, and the Bruins pulled past a Temple team shut out in the second half.

It was an interesting game that featured some good plays both ways. The Bruins found out the Owls had some players, despite a pro scouting analysis that declared there to be no one on the Owls' roster that is draftable. Temple then found out that the Bruins do have draftable talent.

It wasn't that UCLA took their Mid-American Conference opponents lightly, but it did take the Bruins a little time to get a feel for what the Owls' strengths were, and where they had the advantage.

In the end, the UCLA defense was the difference, not only shutting down Temple, but also scoring, when DE Akeem Ayers picked off a pass at point blank range and scored. Ayers did the same thing to Oregon's Nick Costa. Still, it would have been interesting to see what would have happened had Temple RB Bernard Prince not been injured in the first half. 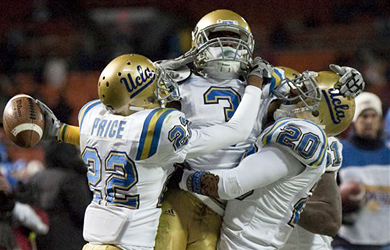 Bruin red-shirt quarterback Kevin Prince re-injured his right shoulder late in the game, and Kevin Kraft came on, but the injury didn't appear serious enough to have lasting effects. It has to give Neuheisel thoughts of something similar to the lost season of Lyle Moevao though.

Afterwards, as expected, Brian Price announced he was headed to the NFL, and pregame talk about Prince's pro prospects did not continue.

The Eagle Bank bowl and a Mac-Conference opponent isn't normally anything a Pac-10 team would get excited about, but UCLA did seem genuinely interested in, and happy (for now) with the event. Next season this would qualify as a disappointment, but Neuheisel correctly noted the game, and the win, was a noteworthy milestone in rebuilding the program. 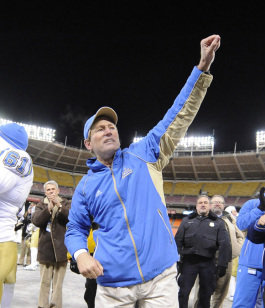 Following were a pair of matchups with Big XII opponents, and an opportunity for all concerned to make their case. For the Arizona Wildcats, the Holiday Bowl in rainy San Diego was an unqualified disaster. Led by Grant High school graduate Ndamukong Suh, the AP College Football Player of the Year, Nebraska's again vaunted Blackshirt Defense pummeled Arizona, and the Cornhuskers set all kinds of records in the 33-0 shutout win.

It was the first ever shutout in the Holiday bowl, and the first ever bowl shutout for Nebraska. Arizona's offense was held to 109 total yards, another Holiday bowl record, but most of that came after Nebraska started changing out starters. The Wildcats had only 34 net yards at the end of the third quarter, and their first drive on the fourth period was their seventh three and out of the game.

A total of six first downs (half the previous total), only 51 offensive plays, and nine punts, were all negative Holiday bowl records the Arizona offense that never crossed midfield in the first half were held to by the Huskers. Makes one wonder what might have happened the last couple of years in Corvallis had the Beavers been able to land Suh. 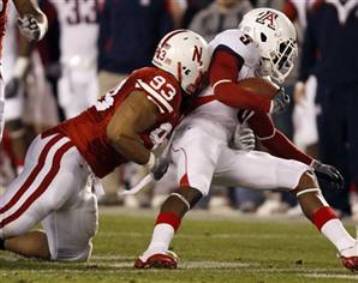 Meanwhile, the Nebraska offense that wasn't supposed to be very exciting came in prepared, with a number of new looks not seen all season (there's that being prepared for a bowl game theme again), and ripped up a Wildcat defense that was already suspect.

Coming immediately after Idaho staged a spectacular 43-42 come from behind win over Bowling Green in the Humanitarian Bowl from Boise, the worst bowl game performance so far this season was the last thing the Pac-10 needed.

On a bright note, former Beaver QB Jonathan Smith, now the quarterback coach for the Vandals, had to be happy when his protégé Nathan Enderle found a sliding Max Komar for a 16 yard touchdown catch with four seconds left, and then hit Preston Davis alone in the back of the end zone for the game winning two point conversion. All this after the Falcons had taken a touchdown lead with 32 seconds left.

The only thing good to come out of the contest from Arizona's point of view is that interest in raiding the coaching staff by other institutions might have died down. Or maybe not?

After playing sharply last year in their return to bowl play, coach Mike Stoops' squad was out of their element in the rain, and against a physical opponent.

Stanford, in their first bowl game since 2001, had a chance to even the record between the Pac-10 and the Big XII against Oklahoma in the 76th. Sun Bowl in El Paso, and they did do something not previously accomplished by conference teams not from Los Angeles this year. They played competitive football for more than brief intervals.

However, the Cardinal, going with sometimes starter senior Tavita Pritchard at quarterback, while freshman Andrew Luck manned the headphones, and waited for his surgically repaired broken index finger to heal, got in trouble early. Pritchard pitched the first of two first half interceptions on Stanford's first drive, and that resulted directly to Oklahoma's first touchdown.

The game was easily the best of the Pac-10's preliminary bowls, with numerous significant plays on both offense and defense, plus special teams, by both teams.

Oregon native Owen Marecic from Jesuit High answered with the Cardinal's first score, and Stanford coach Jim Harbaugh made adjustments, with Pritchard both running and rolling out. Two Toby Gerhart touchdowns led Stanford to a 24-17 halftime lead, but the Sooners came out of the locker room after half time hot, with two third period touchdowns. 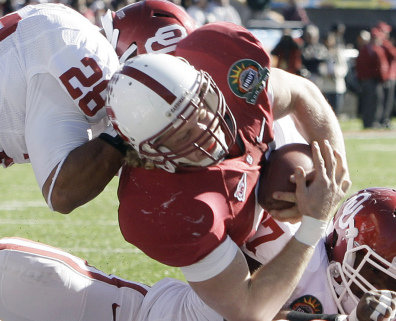 The Cardinal could only muster a field goal after the break, and had trouble getting the Boomer Sooners off the field late. As a result, Oklahoma got their first bowl win since 2005, a 31-27 decision over ‘Furd.

The Cardinal's play calling could be considered suspect at times, but in fairness, the forced switch from Luck to Pritchard had to have torn several pages out of Harbaugh's playbook. Stanford was still the best prepared Pac-10 team from outside LA.

CBS, making their first bowl broadcast of the season, did an impressive job, reminding the Pac-10 audience that rarely watches the eye in the sky network because of their regular season focus in the southeast, that not only does the SEC get more money for the coverage of their games, they get a better product than some of the ESPN shows. Even if it did mean the Stanford band got more attention than any of the conference's more serious performers. Not sure if the director in the skunk suit, or the drummer playing the kitchen sink, helped the conference's image either.

So it is left to the Oregon Ducks to save the Pac-10's reputation against Ohio State tomorrow in the Rose Bowl, lest the country somewhat correctly return to thinking of the conference as the Pac-USC, plus the other nine.

By the way, the Mt. West improved to 4-0 in the post season, after Air Force not only beat back Houston 47-20 this morning in the Armed Forces bowl in Ft. Worth, they held one of the highest scoring offenses in the nation to one touchdown. The Cougars got a touchdown on the opening kickoff of the second half, but even that didn't help, as the Falcons answered with a 100 yard kickoff return for the answering touchdown on the next play.