As the football season fades, basketball is just beginning

Share All sharing options for: As the football season fades, basketball is just beginning

As I thought about writing this post I rolled around a bunch of holiday analogies in my head or thought about taking some sort of Christmas narrative and spinning it into some sports thing, but ended up thinking better of it.  The only story I have is that when I wished Jake a happy holidays, he made sure to drop in a hint to do a write up about my going to the game experiences/thoughts!  Well played blog Manager!  So here is your holiday present Jake, and oh Happy Holidays and Merry Christmas to everyone! 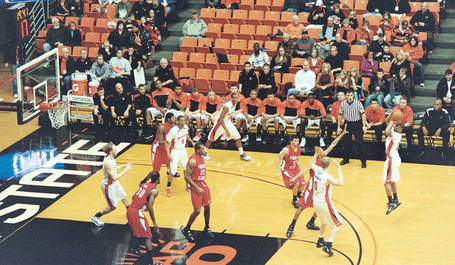 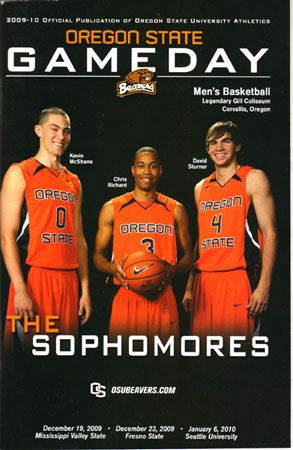 Anyway, this is my seemingly annual post to reminiscence about OSU basketball and this time around (last year it was after the Oregon game in Corvallis) it hopefully serves more of a kicking off the season for everyone.

What better way to kick off the season than a solid at home win for the Beavs against Fresno State, which I had a fun time attending with my family.  I have no real idea about the Bulldogs and it was a pretty sparse December 23rd home crowd, but overall I really felt the team had some good energy.  If I'm not totally mistaken after an early Fresno State 4 to 2 lead that Oregon State was able to take the lead and never looked back for a well played 73 to 65 victory, which takes the Beavs to a 6 and 5 record going into the Pac-10 season.

Calvin Haynes tied his highest career scoring performance with 25 and Lathan Wallace had a really great 13 point game; as well as Omari Johnson and Seth Tarver chipping in for a couple solid 12 point performances.  It is funny because Calvin's performance was kind-of a quiet, but really solid, one and it was Wallace who was kind-of lighting it.  What I really liked about it is that Wallace (and also Johnson) stepped it up when the Beavs were a bit cold and got them going again, whereas Haynes was the solid scoring leader we needed all game long.  It showed some nice balance I thought has been missing so far this season.

The freshman Burton and Cunningham both were solid I thought, and I think Cunningham is going to be a force when he settles into the whole college level play; he is quick and aggressive.  Burton looks to be another force in the making and I like his power and also what a great pass from the top of the key.  But you know many here have said this often already!  Overall though, I was looking over the game program and forgot how many young players we have, sure we lose four good seniors but there is a really good group behind those four. 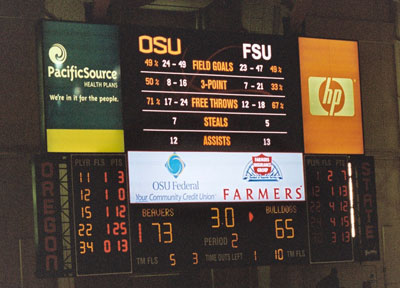 More thoughts/photos and some surprises from the RVM archives after the jump... 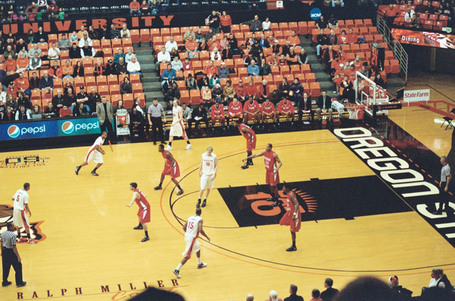 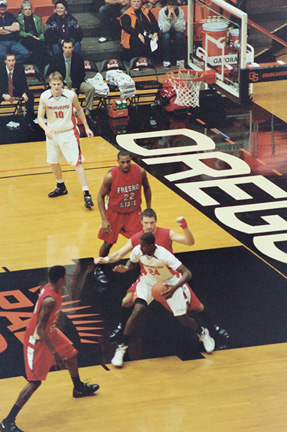 As for some other performance thoughts, first let's get a bit critical and I really don't know what is going on with Roeland.  He looks tentative out there and does not seem to be looking to score.  This could well be to get others involved more with the younger players, but I hope he starts to look to score more in conference play because as AndyPanda pointed out he and Burton could be a great high/low threat all season. The other thing is this team does need to learn to inbound the ball better!  Didn't really matter in this game, but it did get a bit ugly at the very end there (this was the most vocal stuff directed at OSU's play from the crowd in a negative manner, so it wasn't just me!).  They finally broke the press nicely and that was that, Fresno State didn't even really get into that last minute foul after foul after foul deal for they seemed to know it was a done deal.

I guess the only other "negative" was of course the energy level of the crowd was lacking, which last time going to the Civil War game it was noticeable, but for a cold December 23rd evening it was still a nice showing and the Beavs did crank us up at times with some pretty inspired play on both sides of the ball, so not a big complaint for it was a fun game to watch.  Plus just a more relaxed atmosphere to take the entire family to, and a really neat way to ease on into the holiday weekend.

So those are the "critical" parts, my Ebenezer Scrooge moments, I saw in the game and all in all not a big deal for this game. I fully expect Roeland to find his previous season level of play, that the team will continue to improve, and that crowds will be even more exciting than last year's showings.  Again, I do want to say it was a darn good showing by the team with a good level of energy, and this hopefully will help carry the team into what will be one of the tougher conference series against UW and WSU on the road. 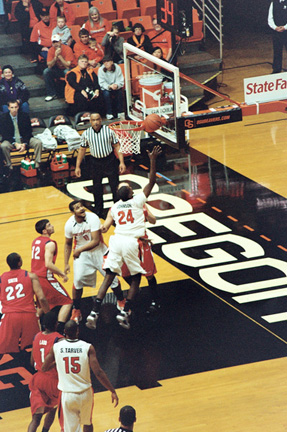 As I noted last season, basketball is the sport that really pulled me into being an Oregon State Beaver, and the sport I really remember the most from my youth.  So, after the very very lean and depressing years, after Ralph Miller left, I have now become very excited about the direction Craig Robinson is bringing to this program. As I mentioned last season I never made it to games during the years when the team was very down, and I regret this.  It is so fun being back at Gill and seeing all the banners and taking in the history that place has, and it was pretty neat to see the CBI Champions banner up there with the rest.

Is this a NCAA Tournament level team?  Not right now, but I think they have the potential to take the program another big step forward.  My hope is that fans haven't bailed on the team since they have had some rough spots in the preseason, this could be a very exciting season and personally I plan to attend more games.  Indeed very much looking forward to it!  Go Beavs!

And from my archives here is a poster image I had from my early fan years.  I thought this would be a fun ending point with having some sort of bridging between the past and future of the program.  Since I can't remember the exact year and players (I do know AC is #45 and that #25 is a mannequin!), I'll leave this as a holiday quiz gift for Beaver Nation and feel free to have at naming this team! 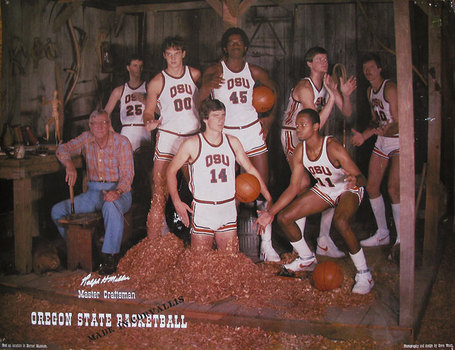