It doesn't get any bigger than the Civil War for the Ages for the Roses. Being the only game at the time, ESPN's national audience Thursday at 6 PM could exceed games on Championship Saturday, where allegiances to individual programs, and haft the top 25 being in action, could slightly divide the football viewing audience.

ESPN's College Football live will lead into the game, and serve as the pregame, so don't expect to tune in at ten after, figuring there will still be plenty of time to catch Erin Andrews on the sideline. Kickoff is scheduled for 6:01, which should at least help with the inevitable overrun at the end of the three hour window, but if you are attending the game, or working, and setting up to record what could be a permanent keeper of a game, select SportsCenter afterwards as well. Remember, twice in the last ten years the War has gone to overtime.

Flip the channels around, every local TV news outlet in the area will capitalize on the biggest event to happen in the state as well, with plenty of talking points before and after the game. And it is news, not just sports news. 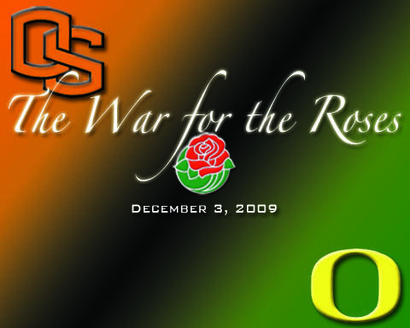 The four largest crowds ever assembled in Oregon have been for the last three Civil Wars in Eugene, and last year's game at Reser. The stakes are higher than they have ever been, as this is the first time in the 113 games where the winner is guaranteed a Rose Bowl trip in any event.

No settling for the Fiesta Bowl, as the Beavers had to do in 2000, when a BCS game was the prize, but only the Ducks could claim a Pasadena trip. No waiting for a vote of the Chancellors after a few days of lobbying and arm twisting by University Presidents. No watching USC and UCLA play for this prize.

The downside is the logjam of a Pac-10 race that could result in the loser watching Saturday's games closely, to see just how far they fall. Oregon could be the state's almost annual representative in El Paso. For Oregon St., a return trip to Las Vegas could be in the works.

Saturday's battle for the Holiday Bowl, when the Arizona Wildcats visit the USC Trojans at 12:30, is the ABC regional game of the week, also available on premium channel ESPN 360 in areas not carrying the game on the ABC station.

And the week, and the regular Pac-10 Season, concludes with the Cal Golden Bears visiting the Washington Huskies, for a 3:30 game, carried only on Fox Sports Northwest. While Washington is shifting into hoops mode immediately afterwards, Cal's fate will contribute to the shakeout of the Pac-10 bowl distribution.

And because tie-breakers aren't the only factor, as the bowls below the Rose Bowl have a slotted choice, not a clotted assignment of a team, television markets and fan bases will be a factor in the decisions, not all of which may come out until on selection Sunday.