Share All sharing options for: Pregame Q+A with the California Golden Blogs

The Building the Dam crew got together with the California Golden Blogs crew, and what you see below is the result. The VD Special handled Cal's questions, and those will be posted sometime today over at CGB. Here are the CGB's answers to our questions:

BtD: Cal has had an up and down season so far. After a great start, and a shaky 2 games against USC and Oregon, it appears they are headed on the right track (save for the defense). How do you see the rest of the season shaking out?

CGB: Tough to say. We have the following schedule:

Let's split the difference and say Cal goes 2-2. It's tough to say who Cal would win and lose to, because there are so many variables. But this is an OSU blog, so let's say we beat Arizona and UW and lose to OSU and Stanford (:(!!!!!!!!!!!!!!!!). That puts us at 5-4 in the Pac10, a middling team. Certainly, there are a lot of other factors in play, but that probably puts us right in prime Emerald/Vegas bowl territory.

Which doesn't seem to faze our readership much. The Rose Bowl is out. Unfortunate, but true. So, the biggest question on their mind seems to be where to go for the Bowl game. People would rather go to a fun place like Vegas or stay in the Bay Area than head to Texas for the Sun Bowl.

You're the AD at Cal-- would you trade Jeff Tedford for Mike Riley in a heads up trade? Why or why not?

Let's see, with Mike Riley, you're pretty much guaranteed an 8-4 season. For whatever reason his team doesn't get clicking until the third-fourth week of the season and they end up losing one game they shouldn't (Arizona was winnable this season, so was Furd and Utah last year, then ASU and UCLA the year before that...). On the other hand, you're guaranteed at least one top 5 upset every season. Who's ready for the Civil War???

With Jeff Tedford, you're guaranteed 9 wins almost every season, but you almost never lose your home games, you save the majority of your faceplants for the road, and every season provides a 10-15% chance of a Pac-10 title if we can pull out our big games. So far the 90%'s been winning, but one of these days the 10% should pull it out. Right?

...Right?I might add that one of the things that makes me unlikely to trade Tedford for almost anyone is the fact that Tedford "gets" Cal. While many coaches pay lip service to academics, Tedford understands that Cal, more than most other Division I-A programs, really cares about its academic reputation, and that fielding a team of players that graduate and represent the University well is at least as important as fielding a team that wins football games. Moreover, he's consistently managed to field teams that don't have to choose between winning and graduating.I might also add HANDS OFF OF OUR TEDFORD!

Has there been any bright spots in particular that have you really excited for next year?

Here is a player we look forward to seeing more of next year: 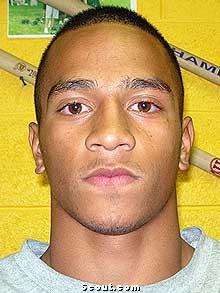 We hope to see less of this:

and more of this:

He is incredibly fleet of foot and packs a real punch. So far, in limited action, he has shown remarkable agility and great vision for the field. He's shorter than most players on the field, but is fearless out there. Certainly, OSU fans can appreciate the short, but stout running back, right?

Keep an eye out for Isi Sofele in the coming years.

We all know about Oregon State's early season troubles, but what explains Cal's late season issues?

If you want a big issue to look at, I'd point to quarterback regression. In 2005, Joe Ayoob, who seemed to be getting it together, fell apart in our final three losses, and the Bears offense ended up losing close games to Oregon State, Oregon and blowing an opportunity to upset USC. In 2006, Nate Longshore rebounded nicely from the Tennessee blowout to roll off 8 victories in a row, but then struggled down the stretch with his accuracy, threw a disastrous pick-six against Arizona and could not locate his receivers against USC. In 2007, Longshore's ankle clearly was never the same after injuring it at Oregon; he wasn't able to plant himself, his arm strength decreased, and he threw some costly picks that put winnable games out of reach. In 2008, neither Longshore nor Riley were very good, showing little signs of improvement, so when we played good defenses, they stacked the box against Jahvid Best and Shane Vereen and forced the quarterback to beat us. They couldn't.

There are a myraid of other issues (goal-line offense, receivers running wrong routes, lack of defensive depth), but if you want the painful reality of our late season struggles, quarterback is what you look at. Quarterbacks don't have to carry you to victory, but they at least need to be competent, and Cal hasn't gotten competent quarterback play in November since the days of Aaron Rodgers.

What is the general public's opinion on Kevin Riley? He's an Oregon boy, ya know. Don't say bad things about our people.

The public opinion on Kevin Riley is that day by day he's washing the Oregon off of him. With each passing moment, he says the word "like" much more often and finds his hair blonder and blonder. Soon, he'll appear less Portland hipster and more Spicolli.

That said, I think the overarching view right now on Riley is talented, but inconsistent. Just this past game, we saw Kevin Riley march down the field twice in the fourth quarter for the go-ahead score. He was hitting receivers perfectly in stride. He had great accuracy.

But, unfortunately, that is not always the case. With mid-range passes, he can have trouble hitting the mark. Even on short range passes, it can be dicey. Against USC, he missed a wide open Jahvid Best 2 yards off the line of scrimmage. Le sigh.

Hopefully, he can continue to build confidence and shake some of that inconsistency. Because if we can see more and more of that end-ASU game Riley, this could be a very good Cal team. But if we get bad Riley, then the D can key in on Jahvid Best and the offense sputters.

What do outsiders REALLY think when they think of Oregon State?

I was unaware that outsiders thought of Oregon State. Gary Payton?

Since 2000, both OSU and Cal have seen unprecedented runs of success. What is the outlook for the next ten years for both teams?

Well, I cannot speak for OSU, because I lack sufficient personal knowledge of the team and the surrounding situation.

For Cal, I can represent that there is a lot of energy surrounding the team. This is due, mainly, to the upgrade in facilities. I'm sure you've all vaguely heard that there were tree sitters up there in the stadium trees and now they are out. That is correct and now that they are out, work is going forward on upgrading the Cal facilities. The facilities are sub par at Cal. And when you are competing with teams like Oregon that offer free Playstations to their players, it can be difficult to recruit the top notch players.

Cal fans are excited that the facilities will be finished early next decade and spark a recruiting renaissance. Certainly, things are going well right now with recruiting, but it can always be better. And hopefully with these new facilities it will be better.

The honeymoon period for Tedford has ended. For better or for worse, the bloom is off the rose. Now, Tedford can work towards hopefully becoming the next Paterno or Bowden. These facilities are the next step in that process.