Share All sharing options for: Turnovers: The Deciding Factor in Thursday's Game?

Football is a sport that includes so many intangible aspects and moving parts, but it oftentimes boils down to the fundamentals. Let's face it, turnovers are a big factor in determining what team will win on any given Saturday. Or Thursday, for that matter.

A major key for Oregon State in Thursday's Civil War, especially due to the fact that they will be playing in Autzen Stadium, will be turnovers.

Preventing them, and creating them.

After all, the Beavers committed four turnovers in last year's game, and the Ducks didn't have any.

When you look at the turnover statistics side by side for these two teams, you'll see nearly identical ratios. The Ducks force more turnovers, but commit more as a result. Oregon State is +4 in turnover margin on the year, and Oregon is +5.

When you look at these numbers in the scope of the Pac-10 conference, you'll see that the Beavers are the best in the Pac-10 in not committing turnovers. But they're the worst when it comes to creating turnovers. 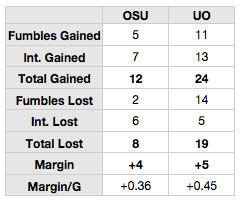 A big reason for the low turnover numbers is because of the two players who handle the ball most in the offense: Sean Canfield and Jacquizz Rodgers. Canfield is completing over 70 percent of his passes, and has a 19-6 touchdown to interception ratio. Rodgers, on the other hand, has been one of the best backs Oregon State has ever seen when it comes to hanging onto the football.

If the way this season has gone is any indication, the Beavers are in good shape in this department. The Beavers have lost just eight turnovers all season, a mark that ranks second in the nation. Only Cincinnati, who the Beavers played earlier in the year, has committed less (7).

It is the norm in rivalry games to assume the final result will be narrow, due the the emotion, passion, and energy surrounding the game. In a game that many predict will be decided by a touchdown or less, keeping control of the football will be key.