Share All sharing options for: Women Waltz Past Concordia 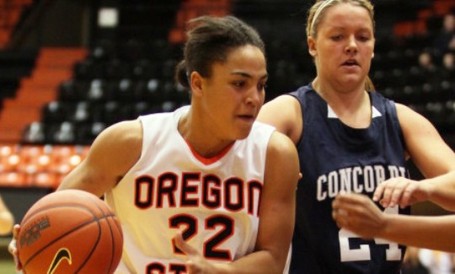 I thought Hayden Palmer did a really good job for us tonight. If you look at her stat line, she did an excellent job scoring, grabbing rebounds, and getting steals. Also, Talisa connected on seven of 12 shots from the field, including four of 8 from three point range, and also had four rebounds and eight assists.

Wagner was also pleased with the way the Beavers played as a unit.

For the whole 40 minutes we were a team. We had 30 assists on 38 baskets. That's one of the good things about our program. We want to play team offense and team defense.

The Beavers jumped to a 56-23 lead by halftime, and the second half was even more successful for OSU, as the game settled into what it was expected, an advanced scrimmage for both teams.

Oregon St. had 7 players in double digits, and played all 13 players, 10 for double digit minutes.

Concordia also had double digit minutes for 11 of 12 players, but none in double digits for points. Ann Snodderly led the Cavaliers Concordia with eight points.

There will be no audio broadcast of Sunday's game, but there will be free streaming video available on Beaver Nation Online (www.osubeavers.com) in addition to a Gametracker link.