Hard to believe we have seen the last of these Beavers in Reser, but the last three games will all be on the road. That recognizes that Oregon St. went from bowl eligible to bowl assured, with their 48-21 win over Washington that improved their record to 7-3, and 5-2 in the Pac-10.

And with help that couldn't have been counted on or paid for from the Bay area schools, with both Arizona and USC, that bowl game could be really good one. We'll know more about that late in the evening of December 3rd. in Eugene, and not before.

The game was a nearly totally dominating performance for the first 50 minutes by Oregon St., who twice built five score, 34 point leads in taking their sixth straight from the Huskies, who are now on an 0-12 stagger against teams from the state. 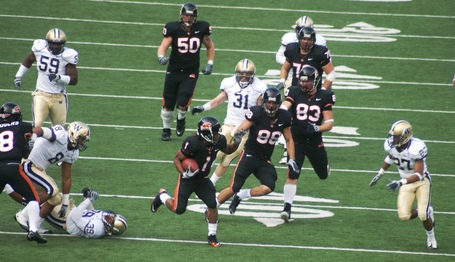 Jacquizz Rodgers Breaks into the open against Washington.

On a beautiful day (by Northwest standards in November), what started with the battle of the bands, progressed to a great Veterans' Day weekend combined performance of the National Anthem (these kids got what is really important), and a great celebration for (and of) 12 seniors, quickly turned into the Beavers' best performance of the season.

One that left the faint smell of roses still in the air.

I'd be lying if I said I wasn't thinking about it," Sean Canfield said after leading the Beavers to their the fifth win in six games. "Especially after the last two weeks, with what's been happening around the conference. Things are kind of wide-open. It's crazy right now. But we will take coach's advice, which is the same advice every year, ‘take it one game at a time'.

The combined University of Washington and Oregon St. Marching Bands perform the National Anthem in celebration of Veterans' Day Week. 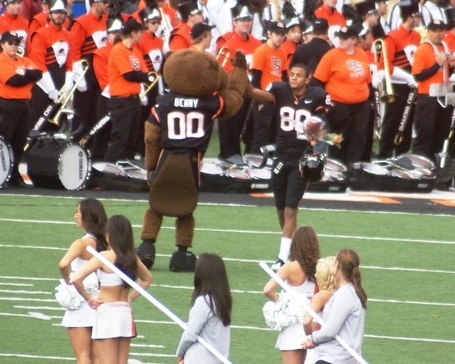 Sometime soon to be married senior Damola Adeniji, who proposed to his fiancé Amanda Cook before the game, even received congratulations from Benny during the introduction of seniors.

James Rodgers had 46 yards receiving, 133 yards on returns, and 176 yards of total offense, and a touchdown. Jacquizz Rodgers had 159 yards rushing, on 21 carries, an 8.8 yard per carry average, and two touchdowns. Three scores and over 330 yards kept the brothers the best 1-2 punch in the country. 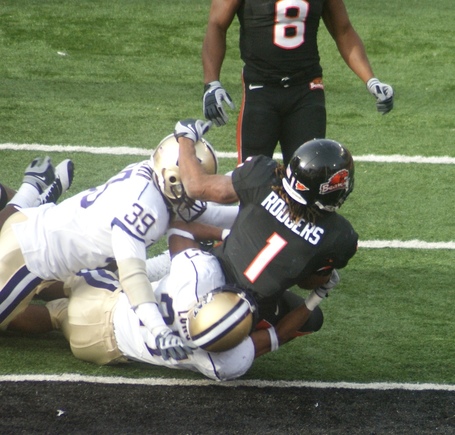 Jacquizz Scores the first of two TDs against the Huskies.

Canfield, the Beavers' senior quarterback, easily won the battle of the two top NFL prospects over Jake Locker. Canfield completed 21 of 29 passes for 185 yards, and four touchdowns (a career record), while Locker completed only 14 of 23, for 153 yards. 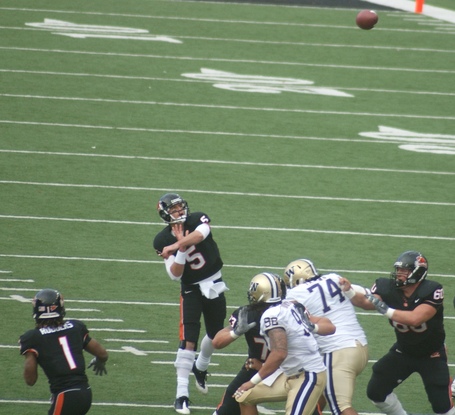 While Locker did fire three TD passes, two of them accounted for almost half of his passing yards, and came while the Huskies were down by 34 points in the fourth quarter. Sacked four times, Locker showed no evidence that he is ready to leave early for the NFL, and appeared uncertain about what to do against the steadily improving (at least until the game was out of hand) Beaver defense. 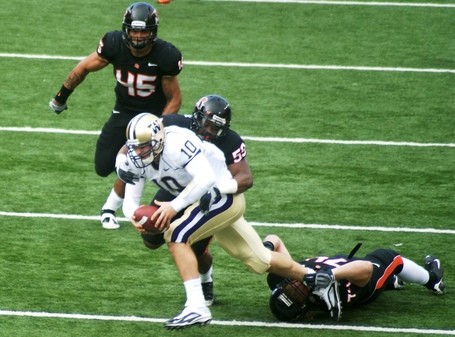 The Beaver's Joe Halahuni showed no uncertainty, however, catching two touchdowns (for his mom) against the team he followed growing up, living an hour away from the UW campus. 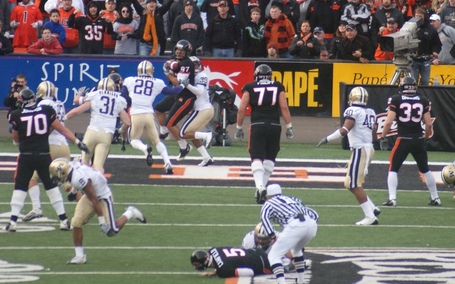 It was awesome. After the game I gave her a hug, and my gloves. She was a little teary-eyed.

The Beavers did continue their habit of not finishing drives early, as, after taking a 7-0 lead on Halahuni's first touchdown catch, they twice settled for 44 yard Justin Kahut field goals. None of that is on Kahut though, who delivered on every kick he was called upon to make. 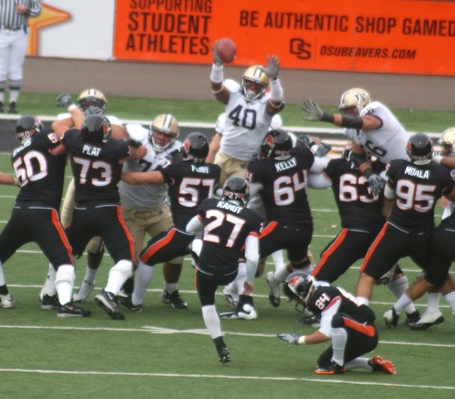 Canfield continues to diversify the offense, hitting seven receivers against the Huskies. 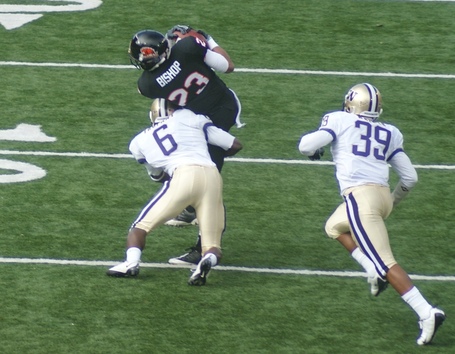 Jordan Bishop's 22 yard reception set up James Rodgers's TD catch that put the Beavers ahead 20-0 by the middle of the second quarter.

Though Locker threw for all the Husky points, Redshirt freshman RB Chris Polk was the main thorn in the Beavers' side. Polk rolled up 116 yards on 19 carries, added 81 yards on returns, and had over 200 total yards. 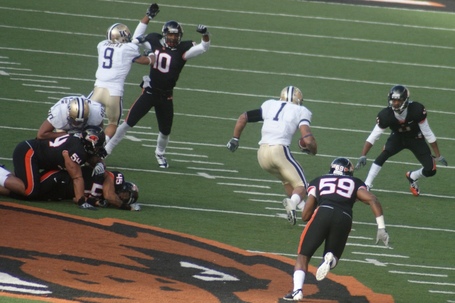 Possibly the most impressive aspect of the game was that when the Huskies did flex their muscles, the Beavers answered.

Polk and Locker put together an impressive second quarter drive that cut the margin to 20-7, and raised the question about whether those two drives that resulted in Kahut field goals might be a reoccurrence of one of the Beavers' season long problems, especially with Quizz on the sideline, working out a stinger to his hip.

Canfield promptly drove the Beavers 70 yards on ten passes in only 1:51 to send Oregon St. to a 27-7 halftime lead.

James Rodgers took the opening kickoff of the third quarter 84 yards to the Husky one, and two plays later, Quizz made it 34-7 Beavers.

I did see something I didn't think I'd see, as true freshman Desmond Trufant caught James from behind. The fumble that came just an instant after James was down would have cost the Beavers the ball, had it not been ruled as being after he was down. With Pac-10 officials, it's hard to be sure how that might come out. 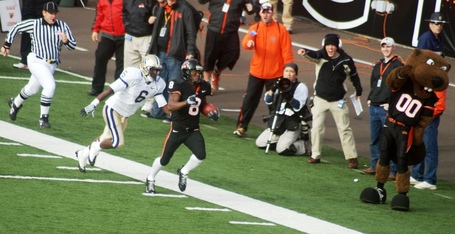 Three Washington penalties derailed the next Husky drive, and underscored the problems they continue to struggle with on the road back. The Beavers answered with another touchdown drive, putting the game away with a 41-7 lead midway in the third quarter.

There was a lot of conversation on the radio, and afterwards in various media about why so many Beaver starters stayed in so long, but there were a couple of things to consider in Coach Mike Riley's decision.

Well ahead in the fourth quarter, the only thing that could really hurt the Beavers would be to take a big loss, and turn the ball over. Yet that's exactly what Canfield did. And with a big lead, regardless of where on the depth chart the players in the game were, the last thing the defense should have done was to turn a receiver lose in the end zone, and well behind everyone else. Yet that's exactly what happened.

Riley certainly didn't wan't things to end on such a negative note, offensively or defensively. So another dose of the Rodgers brothers set up another Canfield to Halahuni touchdown.

And anticipating both the pending Duck dispatch of ASU, by a 44-21 score, primarily due to a 24 point Oregon second quarter run, and the trip in three weeks to Autzen Stadium for the nationally televised Civil War, Riley doubtless wanted to give Oregon Defensive Coordinator Nick Aliotti as much to think about as possible.

The season's largest Reser stadium crowd of 45,274, and the fifth largest ever in Corvallis, filed out in the late afternoon to the sound of Hail to OSU, with the smell of tailgate barbecues starting up again, in a testament to the fact that while it shouldn't matter if its Washington or Eastern Washington (the next visiting team to come to Corvallis), the fact is it did matter that it was the Huskies.

For generations now, the biggest visiting contingents to Corvallis wear purple, and regardless of the relative fortunes of the teams in any given year, or the game's outcome, winning this one means something to both sides.

After a dreary, rainy week, filled with flu, late term workloads, and various nicks and bruises, a near perfect game day, against the Huskies, being both Dad's day and Senior Day, was just the thing to wrap up the home schedule, and head out on the road for the last three games. It was indeed, a great day to be a Beaver.