Share All sharing options for: At Least 17 TV Dates, 7 Nationally, for Hoops

Coach Craig Robinson's Oregon St. Beavers' mens' hoops schedule is finalized, or nearly so, and at least 17 games will be televised to Oregon/northwest homes. A minimum of seven games will be nationally broadcasted.

Oregon State will make its television debut on Friday, Dec. 4, when the Beavers host Colorado as part of the Pac-10/Big 12 Hardwood seris, at 8 PM, in a game nationally televised by Fox Sports Network (FSN).

The Beavers will make an appearance on CBS Saturday, Jan. 23, when Oregon State travels to face the Cal Bears.

In addition to the 17 games already scheduled for television broadcast, the home games against Washington St. and Washington to close out the regular season on March 4th. & 6th. could also be selected for broadcast as part of the Pac-10 Conference wildcard package.

The complete schedule is here.

The Beavers open the season with an exhibition game on Sunday, November 1, as part of Homecoming weekend, against the Southern Oregon Raiders, at 2:00 p.m. 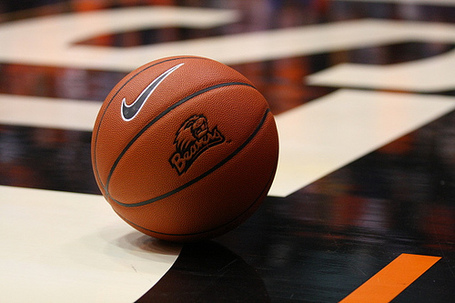