Share All sharing options for: Stanford’s Gerhart ‘a cool cat’ and ‘powerful runner’

Keaton Kristick reviewed the Arizona State win, and had some fun in looking ahead to this week's home game against Stanford, in his weekly column for the Sporting News Today.

Last Saturday we beat Arizona State in Tempe for the first time in 40 years. It meant a lot for us, because coming off the Arizona loss, we were 0-1 in the Pac-10, and that's just not the way to start conference play. I only played about 2 1/2 quarters because I ended up aggravating my stinger. I really wish I could have played more. That was my homecoming, and it was an opportunity to play in front of my family. But it was a good experience, and I tried to make the most of it.

I led the game in tackles with eight total. I'm not really one for stats, but when you get a chance to play in front of your family, you want to be in on every play. My goal was to hit 20, because I know I can. I was calling out Arizona State's offensive plays before they would happen. I think they were kind of shocked. I would be yelling it out, just based on the formation and stuff like that, like, ‘Hey, I got it.' It was kind of funny.

Kristick's eight tackles raised his team leading season total to 42, which ranks him second in the Pac-10.

This week we have an opportunity to play against Stanford. We lost to them last year in our first game. Though we ended up having a solid team at the end of the season, at that point we didn't have a lot of chemistry. We were introducing quite a few guys into starting roles, and it kind of put us in bind. Last year against Stanford, we didn't really know what to prepare for until about halftime, and once we started gaining our confidence, they had the upper hand. Looking back at the end of the year, that game really affected us in the Pac-10 race, and it would be kind of upsetting if the same thing happened again.

Kristick's comments then take a turn toward comic relief.

I might get killed for saying this, but I think it's kind of funny: They're obviously smart people to get into Stanford. Now, what I have seen is they do hold a lot, so I don't think their parents should be too excited. They're sending their sons off to Stanford to cheat. I'm pretty sure their school stands for better things. I'm joking, of course.

Bulletin board material aside, the game will probably feature a lot of collisions between Kristick and Stanford running back Toby Gerhart, and since they know each other, perhaps the exchange of a few pleasantries. 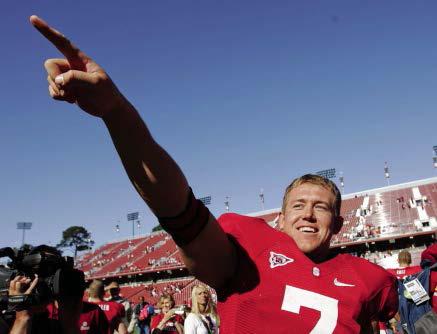 In all seriousness, I think they're a solid team. You can see watching their first couple of games that they're a well-rounded team offensively, defensively and on special teams. They have a really good running back in Toby Gerhart. I know him. I met him at Pac-10 media day, and he's a cool cat. He's a powerful runner and also really nifty with his feet. They're going to try to run the ball at you, and you're going to know it. It really just comes down to stopping their game plan and playing ours.