The game of the week nationally will be in Eugene, when the fourth ranked USC Trojans visit the tenth ranked Oregon Ducks at 5:00, and ABC will be there. ESPN Gameday will be there at 7:00 AM as well.

Which will be a dilema for the well known Cougar fans who always show up with the WSU flag.

Because the Cougs are also on national TV this week! The Washington St. Cougars play the Notre Dame Fighting Irish in the Alamo Dome in San Antonio, and NBC (also known as the Notre-dame Broadcasting Company) has the coverage at 4:30 Pacific Time.

With Arizona, Stanford, and Washington all having byes this week, there are only four games, and the only other game with live TV coverage is at 12:30, when the California Golden Bears visit the Arizona St. Sun Devils. ABC has regional coveage of the Sun Devils' homecoming, with premium package ESPN 360 carrying the game in areas not getting the game via ABC.

The UCLA Bruins visit the Oregon St. Beavers for a 1:00 kickoff, and a (very) rare delayed broadcast. 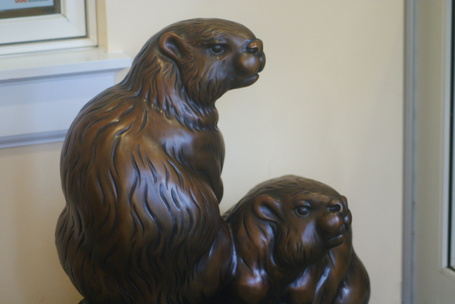