Share All sharing options for: Craig Robinson, Roeland Schaftenaar headed to LA for Pac-10 Media Day, and My Conference Rankings

The event kicks off the Pac-10 season, which concludes with the Pacific Life Pac-10 Tournament March 10-13, 2010, at the Staples Center in Los Angeles.

The Beavers are third up in the event, which begins at 10 AM, and Robinson and Schaftenaar will meet the media at approximately 10:25.

The Huskies have the most back of the teams from the upper half of the conference, and, along with Robinson, the co-best coach in the conference, in my opinion, in Lorenzo Romar. They also produce matchup problems, though not as severe with the departure of Jon Brockman, for many of their challengers.

The Bruins are the Bruins, and coach Ben Howland consistently makes the moves that produce. In a year where departures and turnovers will create a lot of inconsistency, the Howland and the Bruins will let fewer games slip away than other.

Lots of talent back, and many see Mike Montgomery's Bears not only higher in the Pac-10, but capable of a deep run come March. I'll have to see fewer times when they appear beatable to go that high with them. Oregon St. matches up well with them, and that alters both teams' position by about a slot.

Lots of experience back, and some solid additions, but the higher you climb, the harder each next rung on the ladder is to reach. Realistically, this would still be a second straight year of major progress by the Beavers under Robinson.

I doubt the Wildcats can climb any higher in another coaching transition year, to Sean Miller, and with numerous early departures. There are bigger issues with the teams in the bottom half, though.

Stability on the bench with coach Herb Sendek will result in a couple of surprise wins that will float the Sun Devils up a slot or two in a race that should see very little separation of #3 thru #8.

The Cougars would have rated higher, and very well could climb once the games start, but another coaching transition to Ken Bone, who is taking a big step up from the Big Sky, will take some time to gel completely. Look out in 2010-11.

Ernie Kent always responds to pressure with a better year, and has added the best assistant in college basketball in Mike Dunlap. However, a still very young roster will be pressed to be nearly as consistent as they are capable of being good at any given time.

Kevin O'Neill takes over a mess, and his track record doesn't suggest great success under better conditions. The Trojans need to develop credibility and accountability on and off the floor, and in a very competitive Pac-10, no one will give them any passes.

Heavy losses leave Johnny Dawkins' Cardinal with a real problem finding enough points to win games. As fans in the state of Oregon have seen the last two years, the Pac-10 can make a team near the bottom look a lot worse than they really are. This year, it could be Stanford's turn.

The Beavers open the season Sunday at 2:00 PM against Southern Oregon in Gill Coliseum. 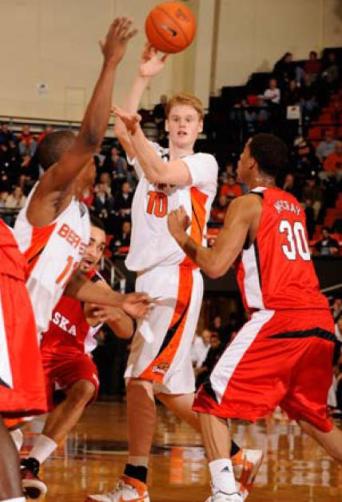