I think I've calmed down from yesterday's rant...

On a day when the most exciting news out of Los Angeles is probably the fact the Trojans have now lost both their offensive and defensive coordinators to the Huskies (of all people), let's spend some more time basking in the glory of Oregon State's 62-58 win over USC on Sunday night.

If you were wondering why that's the most popular headline coming out of Los Angeles, it's because nobody cares about USC basketball anymore. The Trojans lose to Oregon State... everyone gives up on them and acts like they don't care.

Here's Scott Wolf of the Daily News: (emphasis mine)

Uh, not quite. USC's loss to Oregon State today is different because it is debatable who really cares? As I explained two weeks ago, this is not Chapel Hill, N.C., or Lawrence, Kan., or Westwood. If it were, there would be accountability.

So the indignation will be reserved to a few die-hards and that's about it. Frankly, more people are interested in whether Randall Carroll comes to USC.

He's not alone. Let me introduce to you Dan Weber of the Press-Enterprise:

But [the point of this post] is not to list the USC mistakes in the awful Oregon State loss. There's really not enough space for that. It's just to say that it's a good thing no one cares.

Interesting that all this is coming out after the loss. If nobody really cared........

Oh, wait. Dan has something else to add to his last comment:

OK, that's an exaggeration. But not many do. Not enough, certainly.

Ok, we get it. Your Trojans are handed a blow against Oregon State, and you try to back down and hide in the shadows of Pete Caroll's football program. At least the football team is legit, right? 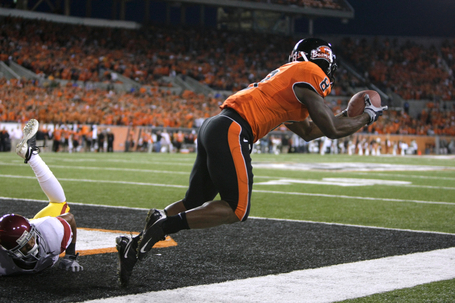 Craig Robinson told us when he was hired that the Beavers will get the elusive Pac-10 win. He didn't tell us when, because he didn't want to put pressure on his guys, but he delivered, sooner than everyone thought. Here are some quotes from Cliff's blog:

"There's part of me that's surprised because it's a tough first weekend, playing two of the top teams in the (conference)," first-year coach Craig Robinson said. "We played two athletic teams in one weekend. We just wanted to keep the momentum going from the second half of the UCLA game and see where the chips fell."

"Our guys are getting better and more comfortable each week," Robinson said. "And we had good energy on defense. There was nothing different (on defense), but we switched around some things. We stayed in the zones because they were so athletics and we needed to keep them in front of us."

I've got more quotes from Robinson in my back pocket (my voice recorder, actually) from his postgame interview with Mike Parker. Maybe I'll transcribe them, maybe I won't, but bottom line is that I like Craig more and more every time I hear him speak.

I wouldn't call it a man-crush, it's just that I'm proud that he's proud that the team is doing things the right way. He's stressing that if the Beavers play their game, run their "stuff", and play hard defense, it won't matter what the other team is doing. And he's exactly right, as evident in Sunday's game.

Before I forget, Cliff also had a brief update on Rickey Claitt, the guard who went out late in the game after leaping for a loose ball (he got the steal, by the way):

The only setback was a stomach muscle pull to G Rickey Claitt with one minute left in regulation. He was on crutches before the end. Claitt has been playing it all season, Robinson said, and he aggravated the problem.

Here's to a speedy recovery for Rickey. He had five points, two rebounds, two turnovers, and three steals in thirty-two minutes.

Will Brown of the Oregonian Beaver Blog cites four reasons why the Beavers won their first Pac-10 games in nearly two years: Coaching, resiliency, the 1-3-1, and the crowd. All good points, but I especially like #1 and #4. Here's a good point:

How long has it been since this team enjoyed (or deserved) a true home court advantage? I can't remember the last time I was so proud of a Gill Coliseum crowd.

The Oregonian's Paul Buker adds some support: (emphasis mine)

Gill was alive again, and the Beavers fed off it.

"My ears were starting to hurt,'' said Schaftenaar.

"It was the loudest I've ever heard Gill,'' agreed Haynes. "I've only been here two years, but it was pretty exciting to have the crowd cheer and yell and scream like they do at the football games.''

But, it's important to stay grounded. Will makes another good point.

OSU's Pac-10 losing streak is over, but the program still has far to go. This team hasn't "arrived." There will be many nights, probably most nights, when it struggles.

We'll see how things go on Thursday and Saturday in Arizona. Until then, I hope you join me in riding this wave of greatness.

See, we're getting attention in the polls already!

FYI... the Beavers didn't gain any ground in the polls that (kind of) matter.

Maybe I haven't calmed down yet.

PS: Craig Robinson is scheduled to join John Canzano on The Bald Faced Truth sometime between 3 and 6 p.m. I'll be listening... you should too.