Share All sharing options for: USC Looking for Fourth Straight Win at Gill

After handing Ernie Kent and the Oregon Ducks a 83-62 loss at Mac Court on Friday night, the USC Trojans (10-3, 1-0) will look to sweep the Oregon schools on the road for the fourth consecutive season when they play the Beavers Sunday at Gill Coliseum.

On Friday, the Ducks and Trojans were tied at halftime. USC made five baskets on five consecutive possessions as part of a 12-2 run to start the second half, and went on to win the game by a twenty-one point margin.

Mac Court is currently the toughest venue in the Pac-10 to play in, and USC guard Daniel Hackett knows why.

"You feel the heat in this locker room?" Hackett told the LA Times. "We come up here and they turn the heat way up. Guys cramp up and get tired. That's why this place is tough."

Setting aside the temperature of the locker room, USC has won four straight at Mac Court. They'll also be looking for their fourth straight win at Gill Coliseum on Sunday, where they haven't lost since 2004.

Both Mayo and Jefferson have departed, but USC returns three starters. Let's meet the cast of characters: 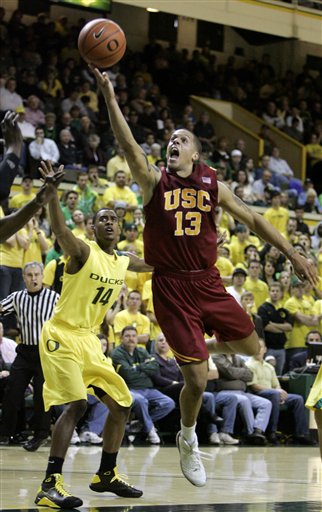 Junior point guard Daniel Hackett (pictured, right) now finds himself as the man in charge on offense, after the departure of O.J. Mayo. He started 25 games last season, but most of his starts came at the shooting guard position. His strength is going to the basket and playing strong at the rim, but he can also drain open three-pointers. He's shooting 44 percent from the field, but he's taken far fewer shots, as expected, than the rest of USC's starters. He leads the team in assists with over six per game, making him the Pac-10 leader in that category.

Junior Dwight Lewis is another one of USC's returning starters from 2007-2008 season, where he averaged 10.8 points per game. He's averaging 16.8 points per game this season, and is USC's current scoring leader. His strongest asset is probably his pull-up jumper, but he's currently USC's most consistent three-point threat at just under 45 percent.

2007-2008 was a disappointing year for junior forward Taj Gibson, who didn't make much improvement after a solid freshman campaign. He's been receiving more opportunities this season with the departure of Mayo and Jefferson, and is averaging 15.6 points per game as a result.

Freshman forward DeMar DeRozen and senior forward Keith Wilkinson round out the starting five for the Trojans. DeRozen is a talented freshman who is still developing. He's averaging nearly 12 points per game, and has missed all thirteen of his three-point attempts this season. Wilkinson, on the other hand, is a seasoned senior who has scrapped for minutes and a spot on the roster during his career at USC.

"Once you put him out there, he'll figure out a way to impact the game," USC guard Daniel Hackett said of Wilkinson. "He might not make shots, but he does other things that people don't see."

He's only started 12 games in his career at USC, but when freshman starter Leonard Washington went down with a high ankle sprain a few weeks ago, Wilkinson was the logical replacement to head coach Tim Floyd.

"He was a guy that any time he got into a game, the game never got worse," Floyd said. "Guys coming off the bench, that's a talent in itself. To see the game, understand what's going on out there and challenge yourself to make sure that the team increases its lead. You're able to trust Keith in a game."

The Trojans and the Beavers will tip off at 2:37 on Sunday from Gill Coliseum. The game will be televised on FSN.