We've been sort of hit-and-miss with Pac-10 roundtables here at Building the Dam this season, but I'm going to give it a shot this week. We'll see how it goes. 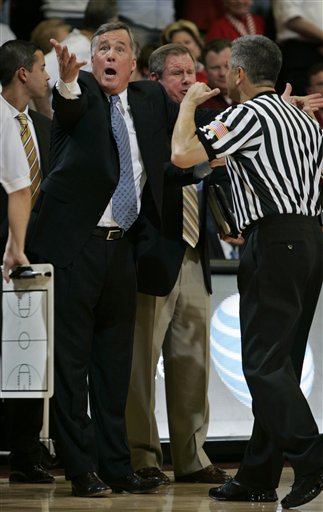 That's a tough one for me to answer. We haven't played Cal yet this season (that will change after tomorrow), and I haven't yet got a chance to sit down and watch the Bears play from start to finish. That being said, the bias in which the author of this question displays is unmistakeable.... I'm going to settle with "Great Coach". With only numbers in front of me to look at, "Greatest Coach" doesn't come to mind when I think of Mike Montgomery. He's not Coach-K status yet. That being said, he does have Jay John by his side to help him out. (See right.)

2. UCLA lost to ASU in a thriller. Is this a sign that UCLA's iron grip on the Pac10 is loosening or just a slight bump along the way to yet another Final 4 appearance?

Let's be real, ASU is legit. And so is UCLA... that's why it doesn't surprise me that ASU was able to overtake the Bruins at Pauley... even if I did fall asleep on the couch in the middle of the second half. We saw how good both of these teams are... The 64-47 loss to Arizona State definitely didn't leave a good taste, and either did the 69-46 loss to UCLA. I still expect UCLA to win the Pac-10 title and do a lot of damage in March, but this one game doesn't mean they're losing their iron grip on the Pac-10, although they better be ready for ASU when they play again later this season, and possibly again in the Pac-10 tourney.

Obviously, I have no problems with the Ducks going 0-and-whatever, so it doesn't totally matter to me. Having just suffered through a 0-18 season a year ago, Beaver fans can definitely relate to what's going on in Eugene. But if I'm the guy's boss, I want him brining in recruits on a more steady basis, not 7 or 8 highly talented freshmen at a time that take a few years to mature. The thing about Oregon though is that with the facilities they'll have here pretty quick, they're always going to be able to take a shot at whoever they want to fill the head coaching job. Let's just say that if I was Ernie, I'd be worried for my job.

4. Mark Sanchez is off to the NFL. Does this give you hope for your team upsetting the Trojan Train next season?

Being a member of the fan-base whose team has derailed the Trojan Train numerous times in the current decade (almost too many to count...), we don't care who will be playing quarterback for the Trojans next year. John David Booty? No problem. Mark Sanchez? No problem. Keep them coming, Carroll.

Haha. I have a feeling I might regret saying that.

5. Right now parity seems to be the name of the game in the Pac 10, and the separation between UCLA, ASU, Washington, California, USC, and possibly WSU and Stanford seems small. With that in mind it also seems like the Pac 10 will only get about 4 (or fewer) NCAA tournament berths. Which teams make it by the end of the season?

From playing UCLA, ASU, and UW, they all seem capable. After tomorrow's game with Cal we'll probably get a better idea of what they bring to the table. But four teams seems reasonable at this point. Washington State doesn't seem like a tournament team this year, and we haven't seen Stanford yet but I don't think they have the same team they did a year ago. That question will probably be a lot easier to answer after we get to see all of the conference the first time around, but I'd say four berths is about right at this point.

Thanks to the fine folks from Addicted to Quack, House of Sparky, Conquest Chronicles, and many others who I've failed to mention for putting this together.

PS: I'm always looking for ambitious people who are interested in delivering fresh content to BtD on a semi-regular basis. If you're interested in becoming a part of our arsenal of authors, let me know. My e-mail address is above. Thanks!