Offseason Will Be Important for Defense-- Again

Share All sharing options for: Offseason Will Be Important for Defense-- Again

As we approach the beginning of Spring Practice on April 30, one of the biggest concerns remains to be the defense. Coach Buker and his staff will need to replace the entire secondary, a linebacker, and three of four defensive linemen.

However, the Beavers did replace their entire front seven between the 2007 Emerald Bowl victory over Maryland and the start of the 2008 season, forming a defense that ranked second in the Pac-10, only behind USC. That's the beauty of the Beaver defense under coordinator Mark Banker. 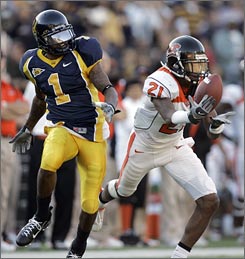 Among the players who will be replaced this year include linemen Victor Butler, Pernnell Booth, and Slade Norris, linebacker Bryant Cornell, as well as the entire starting secondary: Al Aflava, Keenan Lewis, Brandon Hughes, and Greg Laybourn.

"There's a whole group of guys out there who show promise for us to add to what we can do on defense next year," defensive coordinator Mark Banker said. "At least it doesn't look like we are starting from scratch. Maybe the ground we have to make up is not so great."

Those guys include cornerbacks Tim Clark and Patrick Henderson, who will get their opportunity to start after Brandon Hughes and Keenan Lewis have spent the last four years almost exclusively as starters.  They'll both be seniors next year, and will have sophomore Brandon Hardin and junior James Dockery waiting in the wings. Hardin is one of the fastest players on the team and resembles former-Beaver Sabby Piscitelli, while Dockery is still rehabbing from a knee injury he suffered just days before OSU's season opener with Stanford.

Keith Pankey, Dwight Roberson, and Keaton Kristick return as outside linebackers. Kristick may switch to middle linebacker to replace departed starter Bryant Cornell, but there are several other potential starters at this point. David Pa'aluhi is the man the coaching staff likes at middle linebacker. He'll be a sophomore for the upcoming season, giving him three years of eligibility.

"[Kristick] is great at what he does and he would be a great middle linebacker," Riley said. "We do like Pa'aluhi a lot and may not need to make that move."

On the defensive line, the Beavers will need to replace ends Victor Butler and Slade Norris, as well as tackle Pernnell Booth. Kevin Frahm and Ben Terry, who played a lot in relief of Butler and Norris this season, will likely move up the depth chart and start in 2009. Likewise, Brennan Olander of Grants Pass will look to take over for Booth at defensive tackle. Stephen Paea will be the only returning starter on the defensive line come August.

All in all, it looks like the defense should be reloaded in time for the 2009 season. It will be interesting to see if the coaches lock up any more high school recruits or find Junior College transfers to get more depth at defensive back or defensive line-- we'll find that out on February 4 at the Recruiting Dinner.