Note: Just a little over a year removed from competing with Oregon State in the 2007 Men's College World Series, former OSU closer Eddie Kunz was called up to the New York Mets on August 3rd. Since most of us do not have the best access to Eddie, I called upon Eric Simon of Amazin' Avenue who graciously provided us with some information. What follows is a report on how the Mets and Eddie are doing this season. --jake

As a penalty for signing free agent outfielder Moises Alou following the 2006 season, the Mets' first round pick -- 29th overall -- was awarded to the San Francisco Giants. All is fair in love and baseball, though, and the Mets were awarded a sandwich pick between the first and second rounds when the Indians signed Mets' free agent reliever Roberto Hernandez. That pick, #42 overall, was used to select Oregon State righty Eddie Kunz.

Kunz's selection was well-received, though many experts wondered whether he could be effective against lefties. I had a different take at the time:

The Mets currently feature a lot of flyball pitchers, well-suited to the pitcher-friendliness of Shea Stadium. Perhaps liking what they have seen so far in Joe Smith, they took Kunz as another grounder-inducing middle reliever. A reach for the first round, perhaps, considering Smith wasn't taken until the third round last year.

Or, perhaps the Mets are just a little bit superstitious: Kunz was born on April 8, 1986, Opening Day for their last World Championship team. 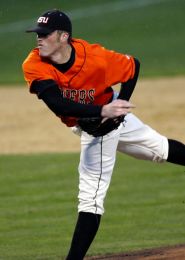 College relievers have been very popular draft choices in recent years because of their accelerated timetables for reaching the big leagues. Kunz was no exception to that. He signed shortly after being drafted and made twelve appearances for the Mets' rookie league team in Brooklyn, NY in 2007. The results were inauspicious, as Kunz allowed nine runs and posted an unimpressive 9-to-8 strikeout-to-walk ratio in 12.0 innings of work. There were some encouraging signs, though. Consistent with his college career with the OSU Beavers, Kunz was a groundball machine in his limited professional exposure in 2007, allowing around three grounders for every flyball.

Without getting into too much detail, groundballs are desirable because they result in extra-base hits (doubles and triples) far less often than do flyballs, and they almost never result in homeruns (inside-the-parkers the rare exception). The fewer extra-base hits and homeruns you allow the harder it is for opponents to rack up big innings. Groundball pitchers also induce far more double-plays than their flyball counterparts, and we all know that double-plays are a pitcher's best friend!

Kunz began 2008 with Double-A Binghamton of the Eastern League, two rungs below the major leagues. In 44 appearances with the B-Mets Kunz compiled 48.1 innings and a terrific 2.79 ERA. He didn't allow a single homrun and racked up a groundball rate better than 3.5 (3.5 groundballs for every flyball), which is outstanding.

Most minor leaguers have to make their way through Triple-A -- the level just below the big leagues -- but an injury to Mets' closer Billy Wagner created a void in New York's bullpen and the Mets called on Kunz -- and his 60 innings of professional experience -- to fill the spot in their relief corps. Kunz wasn't made the closer, but he has appeared in a couple of games so far and there has been some talk about giving him some closing opportunities to see if he may be the Mets' stopper of the future.

A couple of interesting notes about Kunz's brief major league experience so far. He has faced seven batters to this point and has induced six groundballs to just one flyball. The flyball was especially significant because it resulted in a homerun, the first that Kunz had allowed since his freshman year at Oregon State in 2005. That's some three years between homeruns, which is just ridiculous.

With the Mets' bullpen struggling of late, Kunz is expected to play a more significant role in the last two months of the season. The Mets are in a tight race for the NL East division title, and Kunz could very well be a difference-maker down the stretch. He's got a ways to go before he can establish himself as an effective big leaguer, but with each passing day he continues to make OSU proud.