Share All sharing options for: Ask CV3000: Football Advice at its Finest

CV3000 is a pretty cool dude with excellent taste in football.  Read along as he gives expert advice in response to your burning football questions.

I was looking at some statistics at cfbstats.com, and I noticed some very interesting things about UCLA:

-they don't really have any running game; their top 2 rushers combine for only about
65 yards a game and have no significant receiving stats

-their defense has given up almost 5 yards per rush to every team besides Washington State!

Given these stats, what do you think about UCLA, and what will the Beavers strategy be this Saturday?

-Is There a Storm a Bruin? 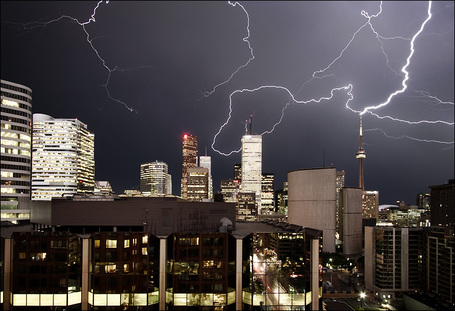 Can UCLA get struck by lighting this weekend against the Beavers?

Frankly, on paper, UCLA is a mess.  I really like their quarterback as a person, he says a lot of very classy and thoughtful things in the press and his performance against Tennessee of the Vastly Inferior SEC was pretty awesome.  Unfortunately, he gets sacked a lot and he throws a ton of interceptions.   Hopefully, the Beavers can force him into a typical day for their offense.

UCLA can play good defense for long periods of time and keep any game close, but their turnovers on offense are crippling.  They do not have the running game necessary to play a ball control style of game against any average BCS conference team in order to keep their defense off the field.

The Beavers strategy should be to punch them in the nose.  We should see a little bit more McCants in this game than most others, maybe even Jeremy Francis.  I anticipate a lighter load for Quizz, but maybe a little more emphasis on involving him in the passing game.  I think the strategies and flow of the game will be most similar to this year's Washington game.

When they don't turn the ball over they can be a pretty formidable opponent, but...what are the chances of that happening?

First, can I call you CV?  I'm a huge Beavers fan, but I'm concerned about the Beavers bowl hopes.  Specifically,  if they win out, will they play in the Rose Bowl?  I hear a lot of ducks fans say that USC would get picked instead, or even Boise State.  Is there any way that another team can sneak in there instead?  What about USC?

I'm having some serious concerns about our defense going into this stretch run.  Specifically, I'm talking about our pass defense against the deep ball.  Why don't our defensive backs turn around to make a play on the ball?  It seems like they don't make enough plays!

-Head on a Swivel

Dear Head on a Swivel,

The Beavers defense is built to stop any elite offensive team, particularly ones with good quarterbacks, by making them one dimensional.  The first way it does this is by controlling the gaps in the middle of the offensive front and forcing running plays to the outside of the field where the Beavers superior team speed and ball pursuit will have the advantage against all but a few players in the conference.

Joe McKnight couldn't get to the corner, maybe Jahvid Best can?  Remember, these guys practice against James Rodgers--so they have an idea about defending speed.

Stopping the run is the key to putting teams in 2nd or 3rd and long so they are forced into low percentage passing plays against a heavy pass rush that gets to the quarterback. If you can't stop the run on first down, then you will lose ball games--ask USC how it felt to constantly defend against a short line to gain.   They probably didn't like it.

Effective man coverage is essential to this strategy on passing plays because it provides Mark Banker's defense with more personnel options to hurry the quarterback. Sacking a quarterback significantly reduces the chances that a team will score on their offensive possession.

As for the defensive backs--in man coverage--their first job is to play the man.  Receivers are always at the advantage because they know where they're supposed to go and the defender does not.  If a defender turns around to look for the ball and it's properly thrown to hit the receiver in stride over-the-shoulder style, then he is probably face down and out of the video frame like that guy Quizz mauled on that outside counter play against ASU.  And your guy will be in the endzone every time.

That's why they coach it like they do; it's to prevent touchdowns and force the offense to consistently drive the ball with running plays.  Not a lot of teams can do that against OSU.

If OSU's defenders weren't fast enough, talented enough, or smart enough to play man coverage and we relied on more zone concepts due to personnel deficiencies  (like a certain team that likes to brag about their 111th ranked secondary) then we would have defensive players primarily facing the ball through the entire play and there might be a few more knockdowns, but a lot more touchdowns.

You gotta buy into the excellence of the program and the coaching staff and believe in the soundness of the strategies before you will reach a state of Pure Orange, my friend!

Now that we've gotten over the fact that he's better than us, we love Jacquizz Rodgers.  Isn't he awesome?  We heard that he's having the best freshman season of any player in Pac-10 history.  What do you think he will do in the future?

You're right.  Quizz is tearing up a lot of teams.  Don't feel bad that he tore you up, USC Defense; he's the best player in the Pac-10.  You weren't the first, you weren't the worst, and you'll always have a special place in Quizz's heart.

Quizz Rodgers leads the Pac-10 in yards from scrimmage with 1176 and is on pace for 1911 yards this year. If he gets there, that would put him in the same neighborhood as these first round running backs' totals from last year: Rashard Mendenhall (1999yds), Darren McFadden (1994), Chris Johnson (1951) and Johnathan Stewart (1867). Quizz would need to pick up the pace a little to beat Steven Jackson's school record of 2015 yards yards from scrimmage.

It's just not fair to have to tackle him.