Beaver Nation, We're all going to laugh at them!

Share All sharing options for: Beaver Nation, We're all going to laugh at them!

From the Desk of the Fun Czar of Beaver Nation: 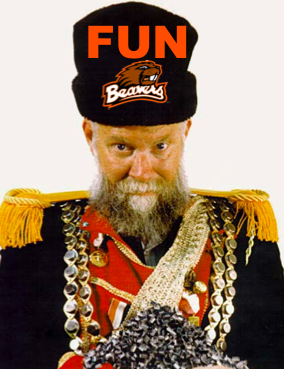 Hey, I know that we've had our ups and downs.  We've had our bad times and our very good times!  But I'm sending this to you because we share something in common that is so vitally important: We are Beaver Believers and there is a simple matter of --ahem-- a ROSE BOWL at stake here this Saturday, people!

Saturday is the most important Fall Saturday in Corvallis in at least two weeks.  It's bigger than any of the wins against USC, bigger than the 2000 Civil War, bigger than all of the  home games you've ever been to as a Beavers fan in the past 50 years! The Granddaddy of Them All is on the line and we are IN CONTROL of our fate!

Let's be perfectly clear: beating the team that only finished 5th in the Pac-10 each of the past two years really isn't really that big of a deal.  It's about the far more successful, more interesting, more prestigious Beavers winning--especially this year.

We have had a good season of fan support and had a great fan effort against USC, but we need to show that we are the best fans once and for all.

They want you to boo them, but that is far better than what they deserve.  They haven't won in our stadium for an entire generation so there's really not any reason to dislike them anymore.  They have a program that is not very far removed from going 37 consecutive years without being nationally ranked.  So they've already had one of their best years of all-time by achieving that this year. It will be a treat for their fans to travel to Las Vegas and sample some excellent buffet-style dining; they'll have a unique opportunity to watch their team set the record for most Las Vegas Bowl losses while also extending their Pac-10 record for most bowl losses and lowering their--already lowest--bowl winning percentage in the process.  It's a run of good luck that couldn't happen to nicer people.

There is no need to give them the satisfaction of booing them.  This year, when that team enters the stadium, we will do something different.  Beaver Nation, we're all going to laugh at them!

5) Repeat after half time

It is beautiful and unique, but most of all, it is honest.  What football fan in this great nation doesn't laugh at them for their continual mockery of good taste already?


Turkey on Thursday, a far less delicious bird on Saturday!
-The Fun Czar