Share All sharing options for: The Jacquizz Rodgers Shoulder Injury

The OSU Athletic Department has made it well known that Jacquizz Rodgers suffered a Grade II separation of his acromioclavicular joint in his left shoulder in last Saturday's 19-17 victory over Arizona. Unless you've been under a rock the last three days, you'll know that that Jacquizz's name has been brought up during nearly every conversation involving Saturday's game. It's a big deal.
Here's some information I've compiled from the Southern California Orthopedic Institute (SCOI) (via CC) and Muir Orthopedic Specialists.

What is the AC Joint in the shoulder?

The symptoms may range from simply tenderness over the joint, to a complete dislocation of the joint as seen in the Grade 3 separation. There may be a considerable amount of swelling if the separation is Grade 2 or 3. A bluish discoloration of the skin due to bruising may occur several days after the injury. In the Grade 3 separation you may feel a popping sensation due to the loose joint shifting. There is usually a noticeable bump on the shoulder if the joint has completely dislocated.

How is the AC Joint usually injured?

The AC joint is injured most often when one falls directly on the point of the shoulder. The trauma will separate the acromion away from the clavicle, causing a sprain or a true AC joint dislocation. In a mild injury, the ligaments which support the AC joint are simply stretched (Grade I), but with more severe injury, the ligaments can partially tear (Grade II) or completely tear (Grade III). In the most severe injury, the end of the clavicle protrudes beneath the skin and is visible as a prominent bump.

What is the proper treatment for a sprained AC Joint?

When a joint is first sprained, conservative treatment is certainly the best. Applying ice directly to the point of the shoulder is helpful to inhibit swelling and relieve pain. The arm can be supported with a sling which also relieves some of the weight from the shoulder. Gentle motion of the arm can be allowed to prevent stiffness, and exercise putty is very helpful to improve function of the elbow, wrist, and hand, but any attempts at vigorous shoulder mobilization early on will probably lead to more swelling and pain.

Treatment for a Grade 1 or Grade 2 shoulder separation usually consists of a sling and pain medication until the sprain, or tearing, of the ligaments heals. In most cases, the shoulder becomes relatively pain free within 3 weeks. Since there is not a danger of making the condition worse, activity can be determined by the symptoms. You can usually do whatever you can tolerate.

An image of a Grade II Sprain... 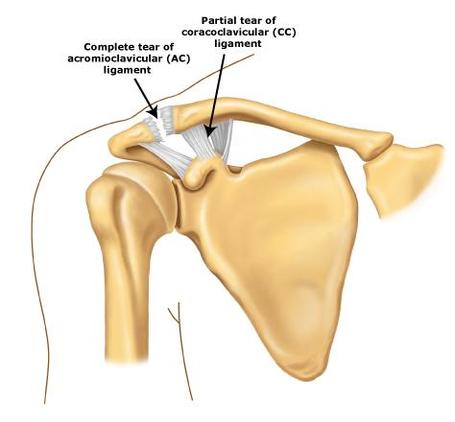 I think we've all realized that Jacquizz won't be completely healthy on Saturday. We'll either see Quizz on the sideline, or Quizz playing thorough pain. An injury like this that usually takes 2 or 3 weeks to heal isn't going to be miraculously healed in a week.

Here's what Quizz had to say when he joined Canzano yesterday on 95.5 The Game: (Apologies for the distortion)

In the end, we all should be confident that our coaching staff and training staff will make the correct decision. Mike Riley and Danny Langsdorf understand what they have in Quizz, and they're not going to jeopardize the remainder of his career by letting Quizz play in the Civil War.

We already saw Mike assert his leadership role by declaring Jacquizz's status as "very doubtful" early in the week. It sends a message to the rest of this team that they're going to have to do it without the Pac-10's leading rusher.

Look-- McCants could probably get the job done as a starter for this football team if Quizz didn't come to Corvallis. Give him the extra carries in practice, give him more touches in games, and this guy is probably the fourth and fifth leading rusher in the conference right now. The Beavers may not have had as much success so far this season as they have had, but McCants has the skills in him. We've moved him up the depth chart, given him a few days to prepare for being in the spotlight, and I expect him to be ready to go come Saturday. Ryan was on the sidelines at Autzen when Oregon State beat Oregon last year at Autzen-- he knows what this rivalry means to the state, and he knows what it feels like to win.

At the end of the day, we all have to be confident that Riley is making the right decision. He understands better than anybody that Quizz is a young man with a bright future-- not a motor inside a set of pads and a helmet.

Mike Riley has more information at his fingertips than we do: let's rest assured knowing that the right decision will be made.

Your opinion is encouraged- I want to hear what others think about this. If you think I'm off base, let me know.