Beaver Nation, take a look into your crystal ball

Share All sharing options for: Beaver Nation, take a look into your crystal ball

We've been talking a lot about quarterbacks this season, to the point that Lyle and Sean almost seem interchangeable, with Lyle holding a slight edge because of his intangibles.

Sean is healthy this week, with Lyle agin the question mark.

"Lyle threw the ball well in pre-game warmups, so we'll see how he looks in the next few days,'' Riley told Paul Buker of the Oregonian. "We'll just have to decide (later in the week) what the best thing to do is. I think we're getting close to the point where we have two guys that are very competitive and also very, very capable of leading the team.''

It will likely be a similar situation for tailback Jaquizz Rodgers, who suffered a second degree sprain of the AC Joint in his left shoulder. Hopefully, I'll gather some information on the severity of that injury later today or early tomorrow, but for right now, Quizz is definitely a question mark.

But what would the Civil War be without some costly injuries? We can all remember the year in which Ryan Gunderson started at quarterback in place of an injured Matt Moore, and last year Yvenson couldn't go because of an injury.

However, all Riley did last year was take a page out of Pat Casey's book, pinch hitting Matthew Sieverson for Bernard. Sieverson rushed for 142 yards on the afternoon, the most memorable being the 38 yard touchdown scamper on the second play from scrimmage. 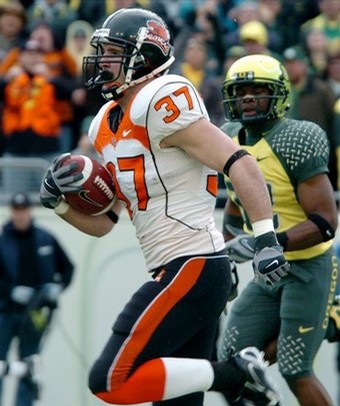 The pride of Bend High School makes it look easy.

The beautiful thing about this year is, although we have injuries, nobody is worried about who will start at quarterback or tailback. We've got playmakers at both, and even if we lose Quizz and don't have Lyle, we still have:

And if we really want to make a statement, we could always pull out Damola "Microwave" Adeniji for a touchdown reception or two.

The Oregon State coaching staff has assembled the playmakers on the roster. However, having Quizz would make us feel so much better.

Beaver Nation, which tandem do you think it will be?