A look over the offensive numbers

Share All sharing options for: A look over the offensive numbers

Have you come crashing down from your post-Beaver-victory high yet?

I thought Sean played a great good enough game, especially in the second half when it mattered. He got off to a slow start, and still was off target on a few balls, but for the most part, he did what he needed to do. There was the one brutal pass in which he sidestepped an Arizona defensive lineman like a matador, then heaved a wobbly spiral into the heart of the Arizona secondary. It all worked out in the end, but he got extremely lucky.

I liked Canfield's ability to go downfield in the game. The pass to James that was dropped was right on the money. The deep bomb to Sammie down the sideline was underthrown, but that might have been beneficial to the Beavs. If Sean hits Sammie in stride, he walks into the end zone and the Beavers score with 0:40 on the clock. And then we must play defense to prevent a touchdown, a la Utah, a la ASU.

A 41 yard touchdown reception would have made James' line look that much better, but we definitely need to stop talking about that. The fly sweep was resurrected tonight in Tucson, just in time for us to torture the UO secondary with it next week. This was good to see, because teams have done a pretty good job of shutting down the fly sweep this season. Perhaps they're finding ways to stop it, but stopping both Rodgers seems to be what teams are struggling with. For most of the game, Arizona only had one Rodgers to stop, and they couldn't even do that.

Okay, so maybe the nickname won't stick. But I loved how pumped up Sammie got after making the 47 yard catch that set the Beavers up to win the game. That catch was huge, but equally as important was the 4 yard slant pattern that he turned into a 34 yard gain (on third down) after gravity robbed James Rodgers of a touchdown on the play prior. That set the Beavers up for a touchdown, which Sammie caught amidst a swarm of Wildcats in the end zone. The Versus angle didn't really show what Sammie did to get open, but have you ever seen The Matrix? I'm just sayin'. The line of scrimmage was the seven yard line, and judging by how much time elapsed while Sean rolled out to his left, one would think it would be difficult to hide from defenders contained in such a small space.

I was generally impressed with Ryan. It seems like he had phases of effectiveness when he was getting 2-4 extra yards per carry, sort of like Quizz does on a regular basis. And then there were times where he rumbled for a ton of extra yards with guys all over him. But there were also times when I felt like he couldn't get out of the backfield, and if he did, he was underachieving by not scrapping for extra yards. It's nice to know that we have a nice back to complement Quizz (a change of pace, per se), but it's also nice to know that he can makes some things happen on his own.

It never really struck me until tonight how much Francis looks like Yvenson Bernard. There was a point in the game (it was the play where he got lit up by a UA defender) where I seriously did a double take becasue I thought it was Bernard making a catch. I think it's the hair...

Great job by Francis, especially in the closing minutes of the game when he picked up the first 25 yards of Oregon State's game-winning drive. I present the unsung play of the game award to Francis for the heads up move to lateral the ball to James Rodgers on the ball he caught over the middle- I don't want to think about what would have happened had we not stopped the clock there.

Watching the first quarter replay off my DVR reminded me of just how good this guy is. He only rushed the ball four times before he exited due to injury on a pass, (Remember his quote, coach Riley? He said "I don't get happy, I just run the ball". If it's not runnin' the ball, Quizz doesn't do it. So don't throw the ball to him anymore!) but they were good runs. Especially the nine yarder. Not the best, I realize, but watching those replays made me want more Quizz! Heal it up this week, buddy!

And how about the beard Langsdorf has accumulated, too sexy? 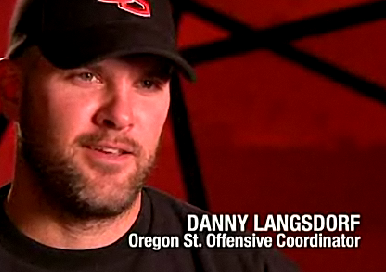