No matter how hard it tries, the quarterback conversation never dies....

We witnessed Lyle Moevao lead the Beavers to a victory over the California Golden Bears last week, obviously without a full-strength shoulder. He got the job done, although having his worst full game of the season on paper. Give him credit: Lyle hit the short passes, converted four passes on third down for first downs, and completed fifty percent of his passes. Also give credit the the OSU coaching staff for sticking to their gameplan. 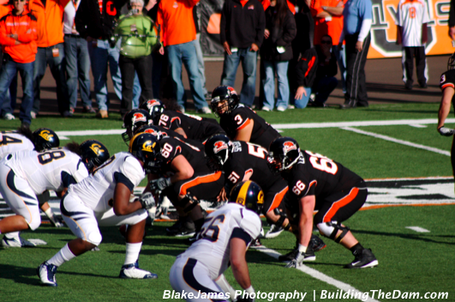 However, Lyle obviously wasn't at his best. When he threw the intercept to Syd'Quan Thompson on the third play of the game, you could tell that the deep arm strength wasn't there. We know that Sean is a better deep threat than Lyle, but still, you could tell by seeing Lyle under-throw and float that interception that he was somewhat off his game.

And then we learned from various sources that Lyle played the game sick.

We know that Sean throws a pretty ball, but I'll argue that Lyle brings more leadership to the table than Sean. Sean did demonstrate that he can play with high intensity in his start against UCLA, but I need to see more from #5 before I change my mind.

I'll also argue that Lyle didn't bring his normal energy to Saturday's game. He was sick, and his arm wasn't completely there. But he still got the job done.

Obviously, barring any drastic developments, Lyle will be the starter this Saturday in the desert. And he'll probably have more arm strength than he did against Cal. But play armchair head coach for a minute. Who would you have preferred to start for your team?

I know there's many of you who are calling for Canfield over Lyle. However, I think there's just as many of us who think Lyle is the man.

But ultimately, aren't you glad that we've got two QB's who can lead this team?!?!

So, Beaver Nation, if you were paid the big bucks, who would you have started against the Golden Bears?