It's a big week for the Beavers. Everyone knows that. CV3000 had a chance to serve up some condescending questions to the California Golden Bloggers this week, and here is the result of the exchange:

1. Look, we know what kind of team you field on the road, and it's basic knowledge that it would take the National Guard to slow down Jacquizz Rodgers. Do you think the Bears have any chance of even providing worthy competition for the Beavers in Reser Stadium?

Luckily for Cal, Worrell Williams joined the army reserve on Tuesday. And I'm pretty sure Syd'Quan Thompson will be parachuting in as part of the Navy Seal program. What's most important here is that Cal's D is set up to stop the run. We're focused primarily on shutting down runners. Great runners like Javon Ringer and Jeremiah Johnson. Of course, the problem there is that both of those took place in the friendly confines of Memorial Stadium. On the road, it has been a different situation.

But we did just contain (not stop, but contain) the USC rushing game. On the road. So, that gives us some hope. Rodgers is a great back. No doubt about that. But we generally have been shredded when we have to respect the pass. Moaveifksfla has played well, but with Canfield in will OSU be able to pass at the same level? Canfield has played well against WSU, ASU, and UCLA. I'd like to think that Cal's D is on a different level than those, however.

So, if Canfield can't make the Cal D honest to the pass (similar to how Masoli was in the Oregon game), then the pressure is all on Rodgers. I'll take our chances there.

2. Did you know that Mike Riley's dad, Bud, signed Jeff Tedford to his first professional football contract and that Mike Riley was Tedford's coach as a quarterback in Canada? Seems like you owe all of your recent football success to Mike Riley's family.

Generally, when we do these Q+As, we try to have open ended questions that allow for free-flowing discussion. This is a Yes or No question. Did you know blah blah blah? So, no, we didn't know. I heard Mike Riley's grandmother, Gramma Riley, appeared to Tedford in a dream and said "Flee Eugene the second you get a chance!"

3. Jahvid Best. That guy plays for you. Is he pretty good or what? Most fragile freshman/sophomore Pac-10 running back since the glass-ankled Johnathan Stewart? 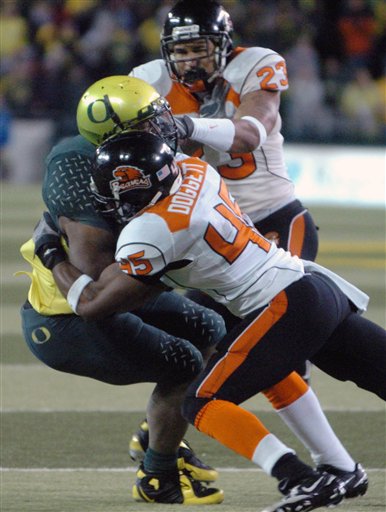 Yes, he is pretty good. Doesn't he lead the Pac10 in all-purpose yards? The reason why he is so fragile is more about the state of the Cal offense. He is, in many ways, our most reliable weapon. Our QB situation is unclear. Our WRs are young. He is the most reliable player, so the Ds really key in on him. He's got a chest injury, elbow injury, and ankle injury this year.

But he's only missed 1 game, which was the ASU game. To his credit, he has pushed through. Even playing with a very bulky arm brace. He certainly hasn't been helped by a shaky O-Line decimated by injuries. So, keep an eye on him this Saturday. Because lord knows the OSU D will be doing that, too!

4. We heard there's more panhandlers in Berkeley than even in Eugene, but far fewer meth labs than Eugene. Is that a positive? What are your thoughts on this ratio? Can you promise to not bring them with you to Real America this weekend? Thanks.

I don't even see how this relates to college football. I was told we could have an open and substantive dialogue on the two most important and serious things in life: college football and the internet [and Beavers--ed.]. Now, we are discussing panhandlers and meth labs. Ratios and bringing things. I wasn't told there'd be math or potluckery.

I guess what I am trying to say is your OSU education is showing again. College football Q+A my ass. 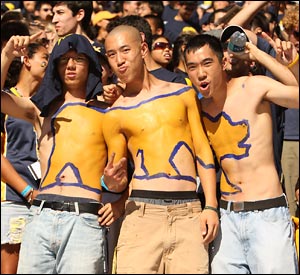 5. Who is your smartest or most impressive player on either side of the ball? It's acceptable to leave this answer blank.

Probably all-everything C Alex Mack. He is anchoring an offensive line with essentially every other starter either injured or out of position. He HAS to manage the game well for Cal to win. He's been doing that incredibly well. There were a few problems against USC, but otherwise the OLine has been doing admirably well. Especially considering the situation! He even is a published author with an article in the Sporting News. There is a LOT of responsibility on his shoulders and brain and he is doing a great job managing that responsibility.

6. When I look at the California Golden Bears statistics, the only conclusion that I can come up with is that the Golden Bears definitely are not good at anything except intercepting the ball, but there's still a chance that they might be okay overall. Do you think they're good at interceptions because they get to practice against interception machine, Nate Longshore or would you attribute it more to practicing against Kevin Riley?

7. Who is your best young player that we might look forward to terrorizing us for many years in the future for writing this? Is it Shane Vereen? Is he related to the famous tap dancer, Ben Vereen? You can deny it if you want to. 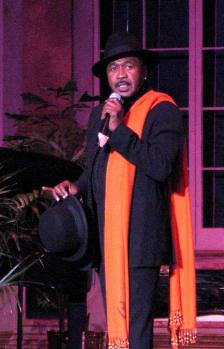 Ben Vereen is disappointed that his son was not recruited by the Orange & Black.

Well, Vereen is a great running back slash avant garde dancer. He does a little tap, some jazz. You know how it is. He's also a sophmore, I believe. As is Best. [Vereen is a freshman--ed] So, those guys are here to stay. We also have Tracy Sloum, who has shown some great moves when he actually gets the ball. Our stable of RBs will be the strength of this team for years to come. If we can have an offensive line with more than 1 original starter on it, we could match up well against any team! 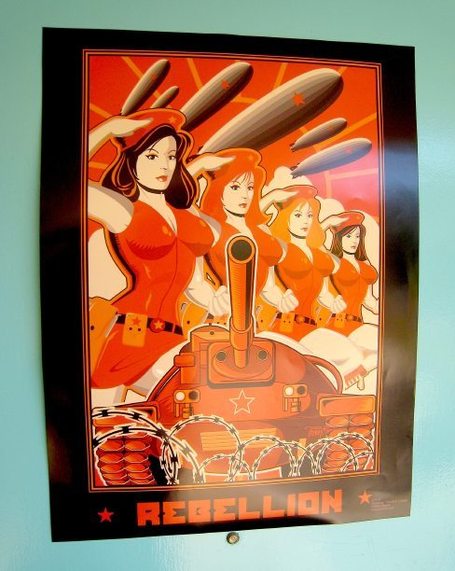 Cal would like to take advantage of their four talented linebackers.

This was designed to take advantage of the talent situation. We have 3 g-r-e-a-t senior leader LBs on this team. Not to mention some solid depth behind them with Eddie Young and The Prophet Mike Mohamed. So, the entire scheme was altered to take advantage of this. I think it has helped us slow down the running games of our opponents this year. We'll see how well it does against Quizz on Satuday. A true challenge that will be.