If you buy something from an SB Nation link, Vox Media may earn a commission. See our ethics statement.

Thanks to the UCLA blog, What's Bruin, Dawg? for hosting this week.

What do you consider to be the bottom? Last 2? Last 4?

It's definitely not one primary factor- perhaps it's lots of things. If you look at the bottom of the conference you'll find Washington and Washington State, who, really, we didn't expect anything out of. We were hoping to see Jake Locker do a few things and win a few games for the Huskies, but a cast on the throwing hand prevented that. UCLA is rebuilding to a certain extent with their new coach. They looked impressive beating Tennessee, but all they've done after that is beat Washington State.

Stanford is doing some things right. Heck, they beat Oregon State, so what can I say. But remember folks, a couple years ago, Stanford was baaaad. And now they're okay. So it's a step in the right direction, yes?

I think the main problem is that everyone has made themselves look like doofuses at one point of the season or another. USC lost to Oregon State. Oregon lost to Boise State. Cal lost to Maryland. Oregon State lost to Stanford and Penn State. Arizona State lost to UNLV. Heck, what's the Pac-10's record against the Mountain West? I don't even want to go there.

Give every team in the Pac-10 a mulligan, and we might be in better shape.

Two: Coming in to the season, many people thought Arizona State would be a dark-horse contender in the Pac-10. Things haven't exactly gone according to plan so far in Tempe. What does Arizona State have to do to get back on track, and can Erickson replicate the same sort of success he saw last year with the team?

Losing to UNLV sucks, but having your Dennis Dome... 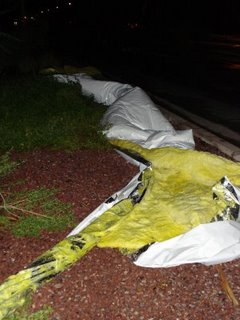 Might suck even more. They need to get that thing rebuilt/ re-inflated.

Three: Well, so much for the other Oregon school beating USC. Does USC's erratic nature open the door for any other teams to surprise the Trojans the rest of this year, or do you think USC's got it out of their system at this point? Out of the Trojans' remaining opponents, which team do you feel will give USC the most trouble, and why?

USC generally has one setback a year, and let's be honest, they're still the best team, talent-wise, in the country. If I could choose one team to beat the Trojans remaining on their schedule, I'd like to see Washington State do it, because that would make me laugh. But really, Cal probably has the best shot. They've got weapons on both sides in SydQuan Thompson (along with a generally stacked defense) and Jahvid Best , and that's what it takes to beat USC, it seems. It probably won't happen, but I'm putting my money on Cal.

I'd go with either five or ten. You would think that it would take more than four years to get Karl Dorrell completely flushed out of everything. He wasn't the best recruiter out there, causing him to occasionally start wide receivers at quarterback. UCLA needs some healthy quarterbacks, some good coaching, a bit of luck, and maybe a sponsorship with Nike. Everyone's doing it, right?

Five: So, does Cal's rotating quarterback bingo have any chance of succeeding during the rest of the year? Can Tedford continue to alternate Riley and Longshore on a game-to-game basis, and perhaps more importantly, do you think he will?

The Beavers don't play the Bears for another month or so, so I'm not really keyed in on their game to game tendencies yet. However, I'm not a personal fan of the quarterback switching philosophy, even though I'm the type of person who would feel bad if an older quarterback who was once the full-time starter was replaced by a young buck. But, Kevin Riley is a local guy, so we'd kinda like to see him turn out to be somebody.

Six: Don't look too closely, but Mike Stoops may actually be in the process of saving his job out there in Tucson. What do the Wildcats need to do in order to continue their early conference success?

Sure, they're winning games, but look at who they've beaten: UCLA, Washington, Toledo, and Idaho. And they lost to New Mexico, which should make you scratch your head. The Wildcat's schedule seems to be the polar opposite of Oregon State's: it only will get tougher for 'Zona, while it will only get easier for the Beavs.