The Beavers are hoping to win their fourth game in six weeks today, as the Beavers travel north to take on the 0-5 Washington Huskies.

Here's a look back at how the Huskies have assembled their 0-5 record, with snippets from postgame articles from the Associated Press, via ESPN.

"We understand we didn't play nearly as good as we can," Locker said. "We're not good enough to come in and just show up and beat teams. We gotta play as well as we can to win games."

Jake Locker was crestfallen. The sophomore quarterback did everything he could to give Washington a chance for an upset of No. 15 BYU and still ended up apologizing for the Huskies' loss.

Locker was penalized for celebrating what could have been a game-tying touchdown run with 2 seconds left and BYU's Jan Jorgensen blocked the 35-yard extra-point attempt to help the Cougars hold to a 28-27 victory Saturday.

"I just was excited," Locker said somberly, looking at the ground while facing a throng of questions about the decisive play. "I like to play the game with emotion and it got the best of me."

Then on the third play after halftime, Broyles caught a short pass at the 27 and spun out of arm tackle tries by Johri Fogerson and Nate Williams. The redshirt freshman then raced for a 77-yard touchdown that put the Sooners up 41-0.

"It was a blur," Broyles said.

Or a nightmare. A coach renowned for stoicism, Willingham was almost desperately animated. He threw his arms skyward, angrily slapped his hand with his play card and stomped as his record at Washington fell to 11-28.

"I do believe that this football team has faced one of the most difficult stretches that any team has had so far this season," he said of losses to three ranked teams. "I do think we are a better football team and now we need to build on it and show it." 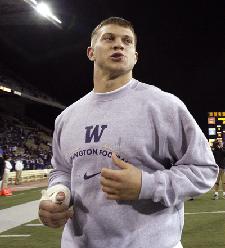 The 0-4 start (0-2 Pac-10) may have sealed Willingham's fate in Seattle as well; Willingham's record fell to 11-29 in his four seasons with the Huskies amid rising discontent from boosters.

"This one is very difficult for me to stand before you because I felt like we had a football team that would be able to go out and win," Willingham said. "Not being disrespectful to Stanford, they played a good game, but I felt like we could win the football game and we couldn't put ourselves in the right position."

Locker had accounted for nearly 70 percent of Washington's offense, but was injured midway through the second quarter. Willingham believed that Locker was hurt throwing a block on a 27-yard reverse to Jordan Polk. Locker left two plays later and immediately went to the locker room. He returned to the sidelines early in the third quarter wearing sweats and with his right hand wrapped.

"We'll be working to see exactly what the dimensions of that are," Willingham said of Locker's injury. "So that will determine, once we figure that out, what kind of a timetable he will be on."

On a breezy night in the desert, Arizona wasted little time putting away the woeful Huskies (0-5, 0-3). Arizona took a 10-0 lead midway through the first quarter when Gronkowski caught a screen pass and raced 37 yards for a touchdown.

Facing the nation's second-ranked defense, Washington struggled behind quarterback Ronnie Fouch, a redshirt freshman making his first college start. Fouch completed 12 of 28 passes for 181 yards and one touchdown, a 20-yarder to Michael Gottlieb midway through the fourth quarter. Fouch also threw an interception.