What is the potential of Jacquizz Rodgers?

Share All sharing options for: What is the potential of Jacquizz Rodgers?

Monday, we discussed what Ryan McCants' role is on this team. Curently, fifty seven percent of the vote thinks that Ryan could contribute on defense as a hybrid  linebacker/linemen, but many thing that he belongs right where he is-- running back.

However, Ryan seems to be stuck in the depth chart behind Jacquizz Rodgers- Texas' "Mr. Touchdown" who ran for 2,902 yards and 43 touchdowns as a senior and 8,245 yards on 136 touchdowns during his time at Lamar Consolidated High School in Houston. Quizz already has already accumulated 718 yards  and eight touchdowns this season. 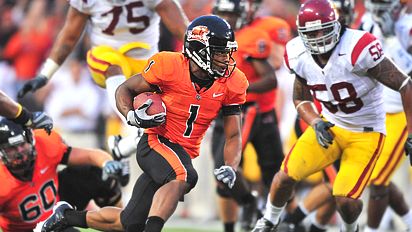 Not only has Jacquizz Rodgers picked up right where departed senior Yvenson Bernard picked off, but Quizz is well ahead the pace set by Bernard during his senior year-- Quizz is on pace to break all kinds of records at Oregon State.

And, Quizz is making all kinds of waves on the national scene. First, he led the Beavers to an upset win over USC with 186 yards. Now, he leads the Pac-10 in rushing yards (by 14 yards per game), and is the tenth leading rusher in the nation. He's a freshman, folks.

As you can see, Quizz is already playing like a seasoned veteran. And he's only a freshman! This brings up the question.... What is this man's potential?

Leave your thoughts in the thread.

(photo taken by Kirby Lee of US Presswire, via espn.com)