Dusting Off some Pre-Season Q&A on Washington

Share All sharing options for: Dusting Off some Pre-Season Q&A on Washington

In the mayhem that is August for college football fans, I failed to post this Q&A with Husky blogger John Berkowitz of SB Nation's Washington Husky blog, "UW Dawg Pound."  The unabridged Q&A can be found after the break. (Note: This was written before the season began, and some things have changed...)

One: There are many pre-season predictions about your team. Why are they all so horribly wrong? Give us specifics.

Most pundits rate the Huskies between 7th and 10th, I am thinking 5th. With Jake Locker at the helm surrounded by a lot of unknown talent the team should make a move in 2008. Defense killed us last year, and there are positive signs we are turning that around. 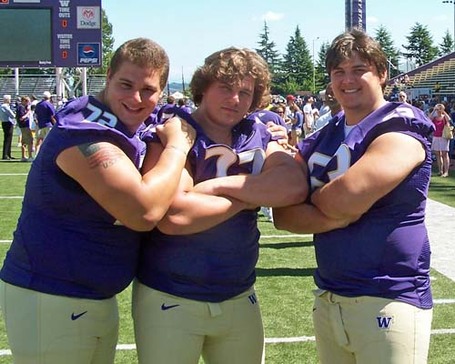 Looks like your guys have spent some time in the weight room, too.

Two: Last season was a dream-come-true/nightmare/uneventful for your team. How do you expect that to effect this year's team? Convince us with a meaningless, out of context statistic.

Losing winnable games in the fourth quarter to Ohio State, UCLA, USC, Arizona, Oregon State, WSU, and Hawaii. The Huskies need to learn how to finish and win in the 4th quarter.

Three: Who is your best player--what is the signature play of his career? Convince us of his greatness by comparing him to a superhero or movie character.

Jake Locker is our signature player and being knocked out of the OSU game by Al Alfalava unfortunately is the play most remembered from 2008. In Seattle we compare him to Jesus because as you all know Jake can walk on water, cure cancer, and turn water into wine. 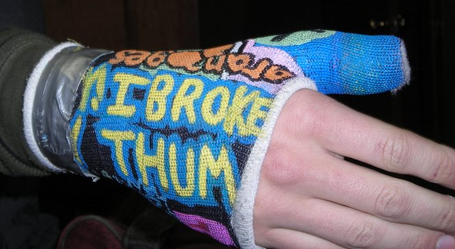 Unfortunately, Locker's season has been cut short by another injury.

Three-A: Who does he rely on to achieve such greatness? Who is his sidekick or supporting character?

Jake is built like a horse, and also runs like one. His sidekicks this year will be WR D'Andre "The Flea" Goodwin, and RB Chris Polk.

Four: Your fans have many traditions surrounding the sport of football. What are some of your most questionable traditions? Do you have any good ones that aren't laughably ridiculous?

We are Washington, nothing we do is questionable other than not going to bowl games for 6 straight years, and having Ty Willingham as head coach.

Five: Napoleon (and later, Abba) had Waterloo, Sen. Larry Craig had difficulties meeting like-minded men; what will be the downfall of your team this year?

If Jake Locker goes down for an extended period this team will be in trouble, however we beat Cal last year without him. You can't win without defense, and if the defense doesn't improve it is going to be the same old story.

Six: Your team would be unrecognizable to its own fans without strength in a certain area. What is your team's secret sauce?

Once again it is Jake Locker who is the Huskies Two all beef patties, special sauce, lettuce, cheese, pickles, onions on a sesame seed bun. Keep an eye on newcomer Chris Polk who just may be the best multi threat running back you have never heard of.

Thanks, John. We hope to have you back this week.