Some Pregame Q&A with Block U

Share All sharing options for: Some Pregame Q&A with Block U

Can you believe that our next game is tomorrow? These Thursday games make time really fly, don't they?

To help us prepare for tomorrow's showdown at Rice-Eccles Stadium, we bring in Sean from Block U for some interrogation. Also, if you're looking for study material, you may want to take another look at the Pre-season Q&A we did with Sean.

One: Last year, we didn't get to see much of Brian Johnson due to injury. Tell us about what kind of threat the Utes have in Johnson.

Johnson can beat you on the ground and through the air, since he's an option quarterback. Unfortunately, he panics when pressured and because of this, the Utes have been mistake prone in their first five games. However, his passing game is pretty deadly and if he can figure out how to read a blitz, he'll be tough to contain.

Two: You saw what Jacquizz Rodgers did to USC last Thursday night. How will Utah contain "the little dude" this Thursday?

Utah's run defense is one of the best in the country, though I guess the same could have been said about USC prior to Thursday's contest as well. Utah kept Air Force, a dominant run team, in check two weekends ago, so they are capable of stepping up. My only concern is if Rodgers goes outside, where Utah has been vulnerable the past few years, though they're more quick on the edges than in the past. Utah's defense has been far more consistent than their offense, so I hope they have what it takes to keep him in reasonable check.

Three: Utah, for the last few seasons, has been one of the premier teams in the Mountain West. At this point, if the Utes were a Pac-10 team, where would they rank along the likes of USC, Cal, Oregon, Oregon State, and the rest of the teams in the Pac? We know they'd have the second highest AP ranking of any team right now, but really, if they played a Pac-10 schedule, how would they fair?

This is an interesting question because we've talked about it on Block Uonce before the season and then again last week. In both examples, we used Washington State's schedule and before a game was played, I had Utah finishing with a losing record, but after seeing how the Utes have performed in the first five weeks of play and the general weakness of the Pac Ten, my revised projection had the Utes finishing 2nd, with a loss to USC. But there were a few toss-up games and it's very possible they could drop a spot or two in this scenario. However, I think with how down the conference is this year, the Utes would finish no worse than fourth. 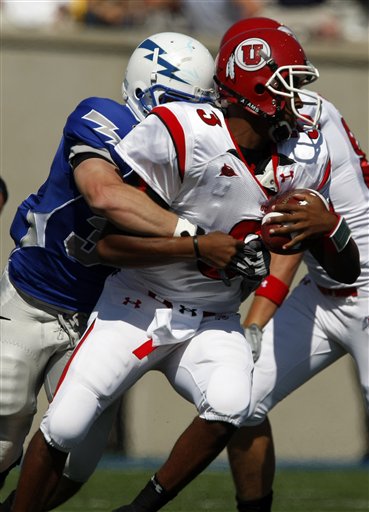 Johnson Stuffed in Utah's backfield...not that there's anything wrong with that. (via assets.espn.go.com)

Four: Not only has OSU demonstrated that they can run the ball on the ground, they've also shown they're an effective passing team. (Jacquizz Rodgers leads the conference in rushing, Lyle is second in passing) Can Utah's defense handle a multi-faceted attack? Or will they force Oregon State to do one or the other? In other words, tell us about your defense.

So far, Utah's defense has been one of the best in the country. With that said, they've yet to face an offense like Oregon State. Their secondary was great last year and hasn't really been tested this year (though Weber State did throw for over 300 yards on Utah, much of that came against 2nd and 3rd string defensive players). So honestly, I have confidence the defense can somewhat manage the Beaver offense, but outside of that, I really don't know what to predict. In fact, I wouldn't be surprised if this game turned into a shoot out. I expect Oregon State to run the ball fairly well and then maybe open things up a bit through the air. But I wouldn't be surprised if Utah's defense totally shut down the Beavers, either.

How's that for a non-answer?

Five: Oregon State is 2-2. The two losses have been unimpressive, the two wins have been very impressive. That being said, are you expecting Oregon State to show up as somewhere between the teams that lost to Stanford and beat USC? Or are you confident that the Utes can compete with the Beavers if OSU plays like it did last Thurday against USC?

I don't think Oregon State is as a good as they looked Thursday, but they're not as bad as they looked against Penn State. This is going to be a challenge for Utah, but they are going to be fired up for this one. The Beavers are a BCS team, coming off a huge win and the Utes still probably remember last year's stinging loss to start the season. Since that loss, Utah has gone 14-3 and are a 4th and long away from having the nation's longest winning streak. So I expect them to step up and compete at a high level, just like I expect Oregon State to do the same.

Six: Along the same lines: In your game preview, you mention that "Overall, the Beaver defense gives up a total of about 319 yards per game. Which ranks 40th in the nation." That's true, but you have to realize that in OSU's defense has played much differently in Games 3 and 4 than it did in games 1 and 2. Also, you argue that "[An] issue with the Beaver defense is their inability to really stop the run". The Beavers held Hawaii's running backs to a total of 57 yards, and USC's running backs to a total of 86 yards (Joe McKnight only had ten yards ALL game. He had over 100 at Ohio State.). Does the performance of the Beaver defense in the last two games make you think that perhaps they've figured something out, or do you put equal weight in the fact that OSU gave up 454 yards at Penn State and 301 yards at Stanford?

There is no doubt the Beavers are a different team today than they were in their first two games. The problem when looking at the first half of the schedule and comparing stats is that you don't fully get the whole picture. Oregon State has struggled in both their road games and done extremely well in both home games. Is it a road issue, an early season issue or an opponent issue? I'm not too familiar with Hawaii's offense, but the Warriors never seemed to be a run-first type team, which could explain the low yards there. But I will concede the defense played extremely well against USC and if they play at that level Thursday, Utah will have some major problems. But I'm not yet sold on their defense to the point where it can shut down Utah's offense for an entire half. I would be shocked if the Utes went into the break without a score, but you never know.