Let's talk about the Pac-10 for a minute. USC returns most of their already talented defense, and they replace wide outs Steve Smith and Dwayne Jarrett with two equally talented receivers. The key for USC in the off-season will be fine-tuning the offense, as they need to develop the running game as well as work in the new receivers. They need to find some sort of strength; they won the Rose Bowl thanks almost fully to their passing game.

Cal returns QB Nate Longshore, RB Justin Forsett, and WR DeSean Jackson., but loses RB Marshawn Lynch, LB Desmond Bishop, and CB Daymeion Hughes. They still are going to have playmakers, as Forsett is fully capable of filling the shoes of Marshawn Lynch. I might put them a little bit higher than #22.

UCLA returns a ton of starters. We'll see if coach Karl Dorrell can play his cards in the right places to avoid the nagging fans and media. If you read Bruins Nation, you'll know what I'm talking about.

Now, for Oregon State. I wouldn't classify OSU as a team that gets a lot of attention, especially in the offseason. Usually it takes a few games for the nation to catch on to what's happening in Corvallis, and that is the point where the Beavers might be placed into a poll. Obviously, they lose Matt Moore and Sabby Piscitelli, which will hurt both sides of the ball. The good news is I'm sure we can all agree that Canfield will fill the shoes of Moore nicely, and Payton and Drayton will make a nice combo in the defensive secondary, along with hard hitting ball-puncher (foot-balls) Al Afalava. 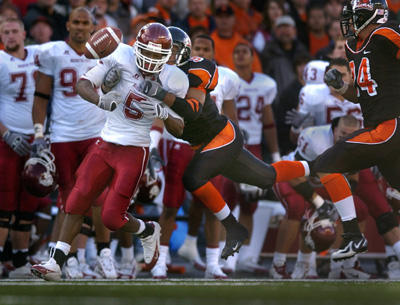 Get your mind out of the gutter. He's a stud, ok?

As far as the rest of the poll, Ohio State seems ridiculously high. They lose virtually their entire offense, and the announcement that Antionio Pittman and Ted Ginn are headed pro doesn't help their cause at all. On offense they return three linemen, the kicker, and a #3 receiver.

Rivals.com, on the other hand, places the Buckeyes at #6. It also lists Oregon in the "also receiving votes" category, which if you count the teams, puts them at #34. The real shocker, is Boise State at #39. Go figure.

But in my humble opinion, the Ducks shouldn't be ranked higher than the Beavers right now. Oregon had 4 straight losses to end the season (including the Civil War and an embarrassing loss to BYU in the Las Vegas Bowl), Gary Crowton (master of the spread offense) has left, Bellotti is walking on thin ice, and to add to all of that chaos the fans aren't that happy either. Oregon State on the other hand, went 8 of 9 to end the season, topped off by a victory over Oregon in the Civil War and a last second victory over Missouri in the Sun Bowl, Riley can now sit comfortably in his desk chair while he reads his e-mail, the stadium is getting remodeled, we're drawing more recruits, and the momentum seems to be headed in the right direction.

Missouri also barely gets it's name on the Rivals list for next season. We're jealous.

Of course, we shouldn't pay much attention to this, because in reality, preseason polls don't mean squat. Heck, we've still got 9 months until football season, there is snow on the ground outside my window, and here I am getting all TO-ed because some site ranked the Ducks higher than the Beavers. (We are talkin football here, people...)

But, hey. What else are we going to talk about regarding college football right now?